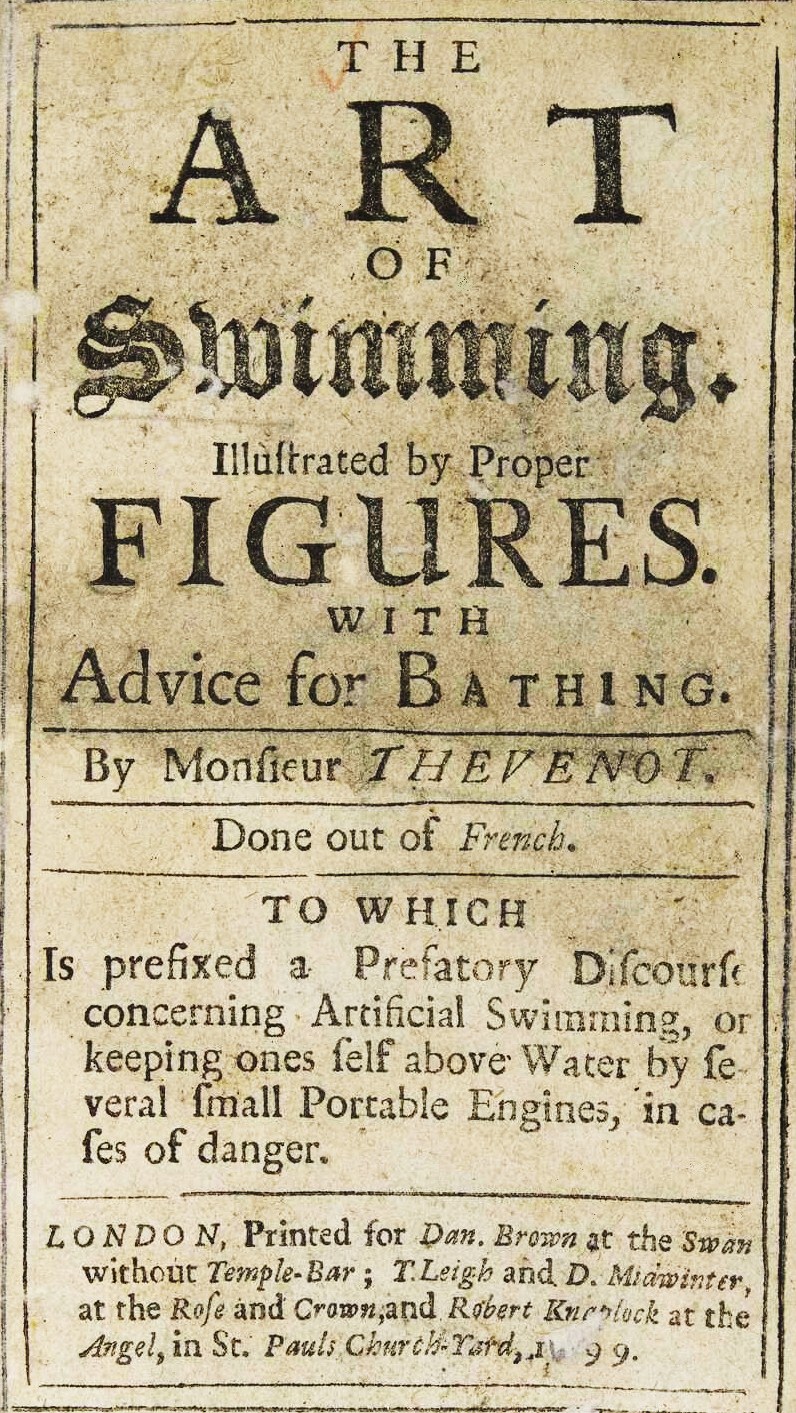 When learning to swim as a young man, Benjamin Franklin had used the 1699 English translation 1696 French book "The Art of Swimming. Illustrated by proper figures. With advice for bathing..." By Monsìeur Melchisédech Thévenot  (1620-1692) who was a French author, scientist, traveler, cartographer, orientalist, inventor, & diplomat. His The Art of Swimming was one of the first books on the subject. 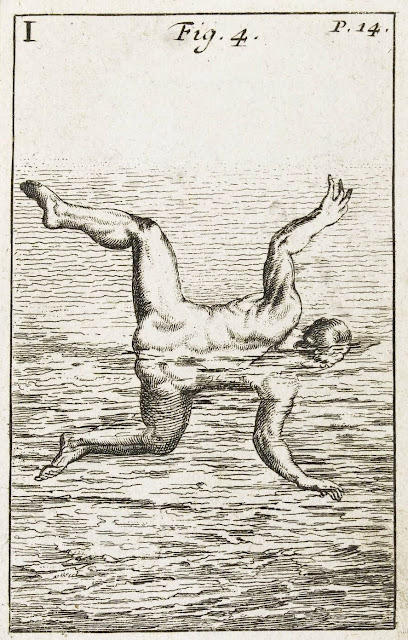 Of the manner of entering into the water

Thévenot described some strokes commonly used today. He also called attention to what is still the safe way to enter the water: know the bottom. He described treading water, which he thought a useful skill. “It may also be very advantageous,” he wrote, “in case a man is obliged to save himself from some enemy pursuing, by leaping into the water in a dark night; for in that case, one may wait, without making any noise, till he is passed by, and then go again on shore.” 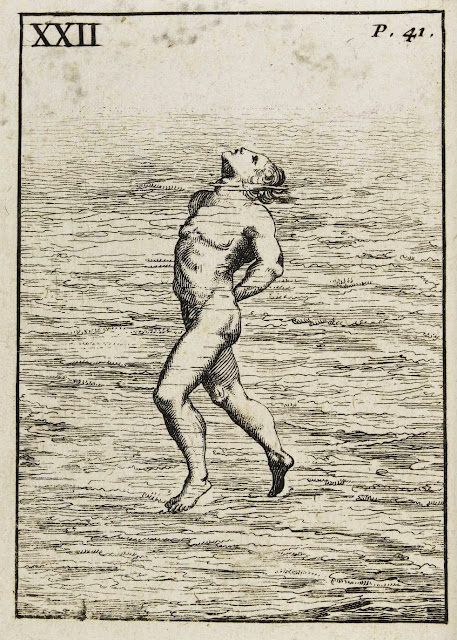 Suspension by the Chin

Thévenot, wrote that because a person is “near the like weight with water,” swimming is easy “insomuch that lying on his back without motion, and holding in his breath he cannot sink.” 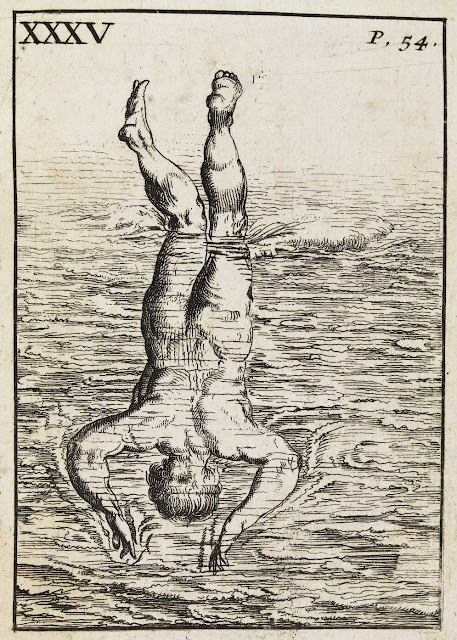 Much of Thévenot’s book is devoted to such movements as swimming with both feet out of the water, or “The shew out of the Water four Parts of the Body,” and to turns. But he described swimming strokes we might recognize and explained something like what we would call the sidestroke, which Middleton said was “a laborious” way of swimming but “swifter than any of the rest.” 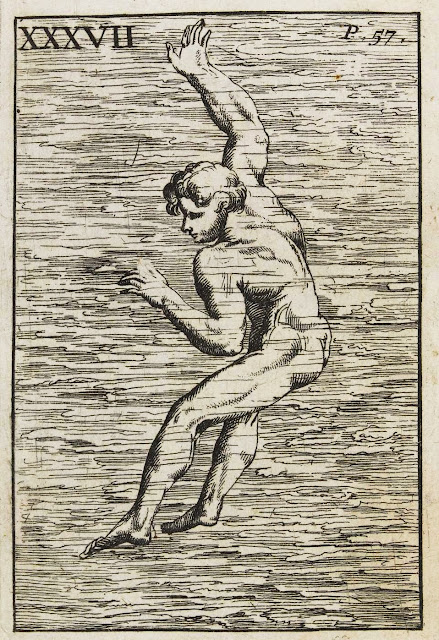 To come to the top of the water, after having dived

Thévenot details the mechanics of stroking: The action of Swimming in Man, like a Boat with a pair of Oars, is nothing but a motion propagated by Vectes, whose Fulcrums are moveable. The consideration of human Bodies, of the management of their Arms and Legs, from the same Principles, in other Arts and Exercises, shew evidently to us the reasons of several strange and surprising actions, as in Wrestling, Fencing, &c. and at the same time might give us inlets to further and unthought-of Improvements. 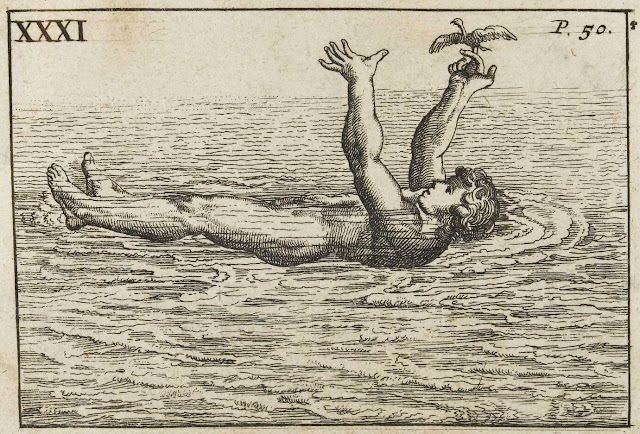 To swim holding up the hands

Suppose you Swim on your Back or Belly, lower, or sink your side, and at the same time elevate your right one. In Swimming, when you are thus laid, move your left hand as often as you see convenient, without either separating it far from your body, or sinking it, perpetually striking it out, and retracting it, as in a right line on the surface of the water. Besides the pleasure of Swimming thus, you may also find an advantage by viewing as you please either side of a river, and that one side may rest while the other is employed. 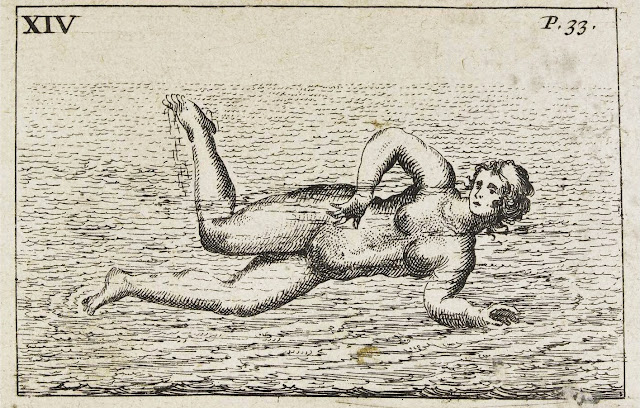 To swim neither on back, nor belly

Thévenot also described how to dog paddle: You are not to imagine that this way is difficult, for it is so far from it, that several who never knew how to Swim before, by practising of it by chance, have kept themselves above water. To Swim like a Dog, you must elevate or lift up and depress one hand successively after another, and do the same also with your feet, only with this difference, that with your hands you must draw the water towards you, and with your feet drive it from you; you must begin with the right hand, and right foot, and afterwards with the left hand and foot, and so successively. 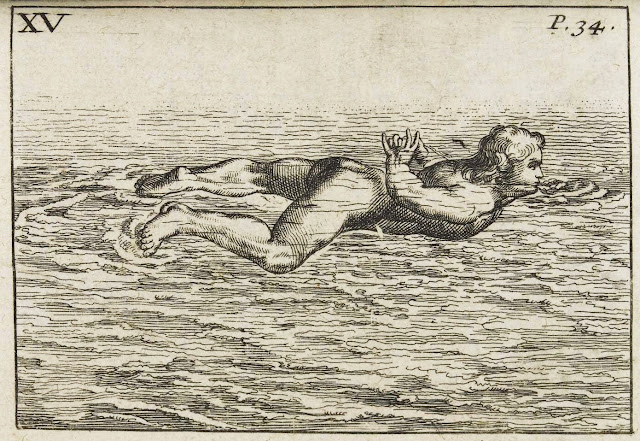 To swim on the belly holding both your hands still

Thévenot thought a stroke he called The Creep was useful for extricating the swimmer from weeds. It is close to what is known today as the breaststroke: The action of Swimming in Man, is very like the motion of Creeping in reptiles; as suppose a Snake, for example, who resting or stopping first, with his fore parts, draws the rest of the body towards them; and it is a way very serviceable to get clear of weeds. To practise it, being upon the belly, you cast your hands forwards, and your feet softly backwards, but close together, and thus you advance, extending your arms and hands as far from your breast as possible, your fingers close, and the palms of your hands a little bent, turned towards the bottom; for being in this posture, if you draw towards your breast with your hands and arms, the water that is before you, by that you give time to the rest of your body to advance further, and disengage yourself from the weeds.

For safety, Thévenot also mentioned swimming with bladders: Besides the common helps of Cork and Bladders, &c. that young beginners make use of to learn, there might be invented several small Machines of different uses for different purposes. How easy, and at the same time how useful, might several Instruments be found out that were very little and easily portable, by which one might pass any River, or escape any danger of the water. Girdles of several sorts (whereof I hear of one lately invented, and very useful) might be made for such cases, of any Materials that are flexible and impervious to the water, such as oil’d Cloths, and several sorts of Leather. A Cylindrical Case made of oil’d Cloth, and kept open on the inside by Iron rings fastened in it at a moderate distance from one another, so that clapping them together it might go into one’s pocket, might be so contrived as to tye round one’s Waist, and fastened to keep the water out, and that alone would save from being drowned.
Posted by Barbara Wells Sarudy at 4:00 AM