Croquet is, like pall mall, trucco, jeu de mail & kolven, clearly a derivative of ground billiards, which was popular in Western Europe back to at least the 14th century, with roots in classical antiquity.  Researchers claim that both golf & croquet evolved from these ancient sports, and that billiards was a modified inside game of croquet.
1650 'Le Centre de l'Amour, Decouvert Soubs Divers Emblesmes Galans et Facetieux' was first published (by Chez Cupidon) c 1650.

Some researchers believe the game was introduced to Britain from France during the reign of Charles II of England, & was played under the name of paille-maille or pall mall, derived ultimately from Latin words for "ball and mallet."
1626 Adrian van de Veen Frederick V, Elector Palatine on the Maliebaen in Den Haag

Played during the 17th century by Charles II & his courtiers at St. James's Park in London, the name of the game was anglicized to Pall Mall, which also became the name of a nearby street. "Mall" then evolved into a generic word for any street used for public gathering & strollings.
The Pall Mall at St James, London, from a 17th century map by Faithhorne

In his 1810 book entitled The Sports and Pastimes of the People of England, Joseph Strutt describes the way pall mall was played in England in the early 17th century: "Pale-maille is a game wherein a round box ball is struck with a mallet through a high arch of iron, which he that can do at the fewest blows, or at the number agreed upon, wins. It is to be observed, that there are two of these arches, that is one at either end of the alley."
David Johnson (American artist, 1827-1908) Croquet on the Lawn

In Samuel Johnson's 1828 dictionary, he defines the game, "A play in which the ball is struck with a mallet through an iron ring."
Winslow Homer (American artist, 1836-1910)  Croquet

A similar game was played on the beaches of Brittany.  Some researches believe that the rules of the modern game of croquet arrived from Ireland during the 1850s, perhaps after being brought there from Brittany. Records show the similar game of "crookey" being played at Castlebellingham in 1834, which was introduced to Galway in 1835 & played on the bishop's palace garden, and in the same year to the genteel Dublin suburb of Kingstown (today Dún Laoghaire) where it was first spelled "croquet."
Winslow Homer (American artist, 1836-1910) Croquet Players

The oldest document to bear the word "croquet" with a description of the modern game is the set of rules registered by Isaac Spratt in November 1856 with the Stationers' Company in London. 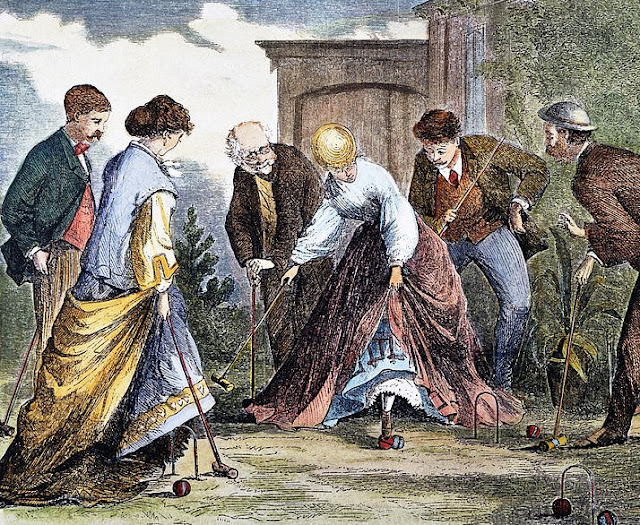 The tale is that the game traveled from Ireland to England around 1851.  An unidentified Miss MacNaghten observed peasants in France playing a game with hoops made of willow rods & mallets of broomsticks inserted into pieces of wood & introduced it in Ireland.  Sometime around 1850, she passed the idea to a Mr. Spratt and the result was Spratt's rules for croquet published in 1851.  Spratt then passed the game on to John Jacques; who claimed that he made equipment from patterns he bought in Ireland & had published rules, before Spratt introduced the subject to him.  Whatever the case, Jacques was the first to make equipment as a regular business; and in 1864, published his first comprehensive code of laws.
1870 Croquet Published in Every Saturday An Illustrated Journal of choice Reading, Boston


At first, croquet was most popular among women,  It was a new experience for them to be able to play a game outdoors in the company of men.  Early games of croquet were carefully chaperoned.   The game's popularity grew in the 1860's, where garden parties began to be called croquet parties. 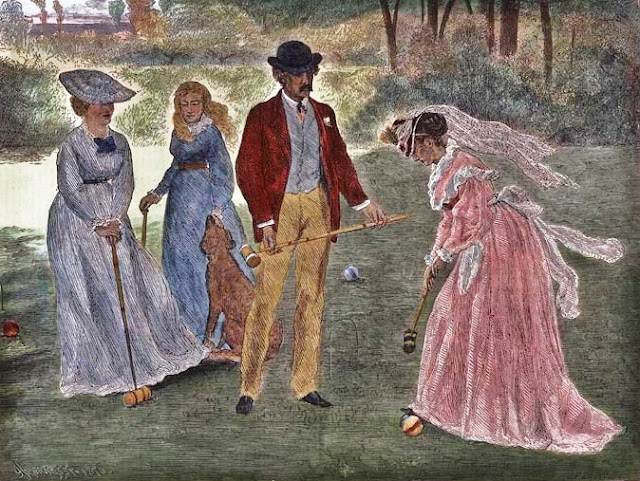 1870 Croqueting the Rover.  Published in Every Saturday An Illustrated Journal of Choice Reading. Boston

1868 saw the formation of the All England Croquet Club with the purpose of creating an official body to control the game and unify the laws.  They needed to find a ground, and in 1869 leased four acres in Wimbledon.
1871 Preparing for Croquet published in Harper's Weekly, New York, July 22, 1871.

In 1875, one lawn at the club was set aside for exciting new game of lawn tennis, which was gaining popularity much more quickly than croquet.  In April, 1877 the club name was changed to the All England Croquet and Lawn Tennis Club; and in July, 1877 the first lawn tennis championship was held at Wimbledon.
1872 The Last Croquet Game of the Summer published in Harper's Bazar, New York, Nov. 2, 1872.

Croquet began to decline as tennis grew & proved to be more of a money maker.  In 1882, croquet was deleted from the club title.  However, croquet continued & went through a regrowth.  In 1899, the name was restyled again to to the All England Lawn Tennis and Croquet Club which it remains today. 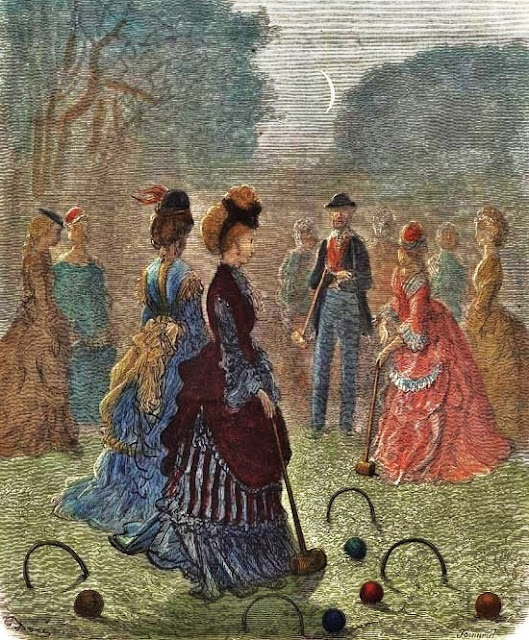 While croquet was on the decline in England, it was beginning to be the latest rage in America. Croquet equipment was advertised in the New York Clipper in 1862.  In a story of an elopment in the November, 1864 issue of Godey's Ladies Book, they described the intended bride, "her petite figure and dove-like eyes caused her at once to become "the rage of the park, the ball-room, the opera, and the croquet lawn." In 1865, the Newport Croquet Club was formed in Rhode Island.  The April 1865, Godey's Ladies Book published a few rules for the game declaring, "As this game is now becoming very fashionable, we give some of the rules that govern it."
1862 John Leech (English artist, 1817-1864) Croquet

When Vassar College opened , an announcement Godey's Lady's Book. August, 1865, stated, "The play-grounds are ample and secluded; and the apparatus required for...such simple feminine sports as archery, croquet (or ladies' cricket), graces, shuttlecocks, etc. will be supplied by the college."  In the same issue, the magazine explained, "A NEW and fashionable amusement for the ladies may be found in the game of croquet , which is fast winning its way into the favor and esteem of all who make its acquaintance. It is a delightful game; it gives grace to the movements of the players; it can be played on any little grass-plot, and the implements of the game are becoming so cheap as to place them within the reach of all. Boys and girls, young men and maidens, and (as we do know), a good many older ones, find in it a most healthful and fascinating out-door recreation."  Two months later, the magazine noted, "Among the late novelties we notice pocket-handkerchiefs having a lady in croquet dress with mallet in hand, embroidered in gay colors in the corner."
1865 John Leech (English artist, 1817-1864)A Nice Game For Two Or More

By April of the next year, Godey's was featuring a croquet dress in one of its fashion plates, "Croquet dress of black alpaca, trimmed round the edge of the skirt, up the front, and up each breadth, with bands of green silk cut out in points. The basque is made quite long, slit up to the waist at the back, and turned over with green silk both back and front. The sleeves are trimmed with points of green silk to match the skirt, and the corsage is turned back, in revers, showing a fine worked chemisette. Hat of black straw, trimmed with a puffing of green silk, and a long white plume." 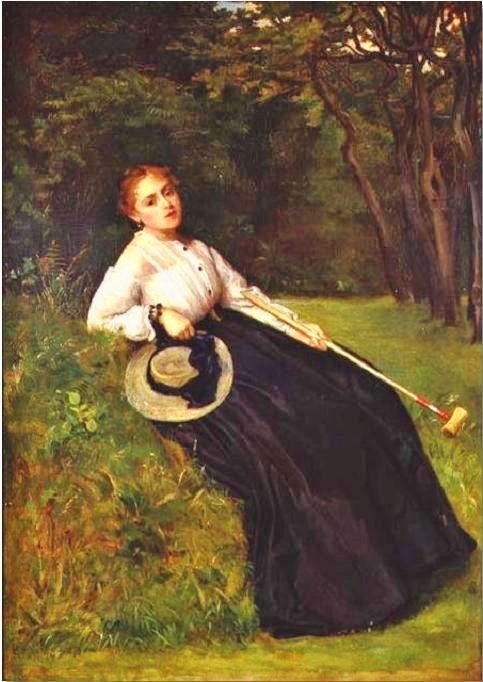 1867 Philip Hermogenes Calderon (French-born English painter,1833-1898) Resting in the Shade after a game of Croquet

Milton Bradley & Co in 1866, published "Croquet - It's Principles and Rules." In February of 1867, Godey's explaned that croquet, "requires for its full development a level ground of well-mown and well-rolled grass (unless all are equally acquainted with the inequalities, when slight undulations may add to the interest of the game); but it can be played on the sand of the sea-shore where it is hard and level, or upon well-rolled grave, or asphalte covered with a thin layer of fine broken shells." 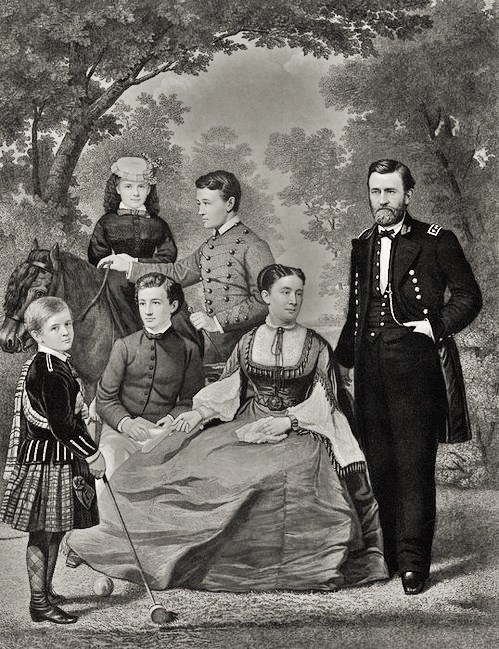 Later in 1867, a New York newspaper editorialized, "never in the history of outdoor sports in this country had any game achieved so sudden a popularity with both sexes, but especially with the ladies, as Croquet has." 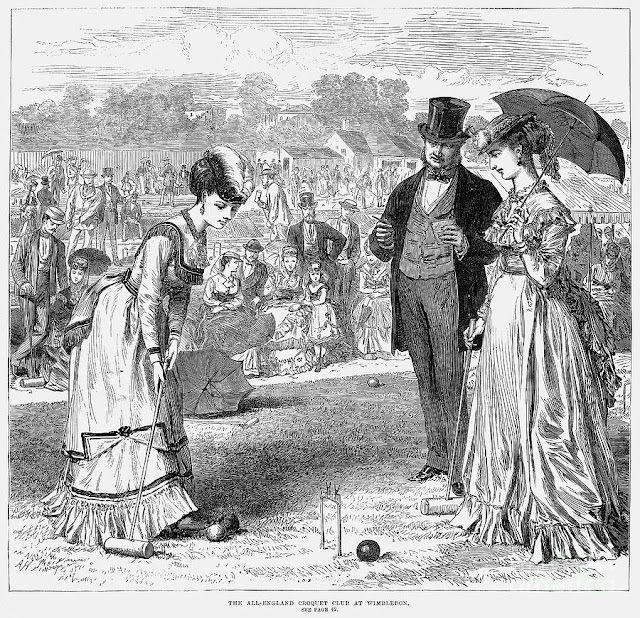 The Delaware County Republican newspaper of July 10, 1868. carried an announcement of a variety of wooden croquet sets for sale, "BOX WOOD, Rose Wood, Lignum Vitae, Rock Maple, and less expensive sets of Croquet Games." By 1869, churches were offering croquet to their guests. The Delaware County American announced on June 2, 1869, next to the Maple Church, "a strawberry and ice cream FESTIVAL, provided and served by ladies...a Concert, Vocal and Instrumental ...also, a croquet lawn, with the requisite conveniences." When the strawberries ripened the following June, the church ladies once again offered their festival including croquet. The popularity of croquet was growing by leaps and bounds in post Civil War America. 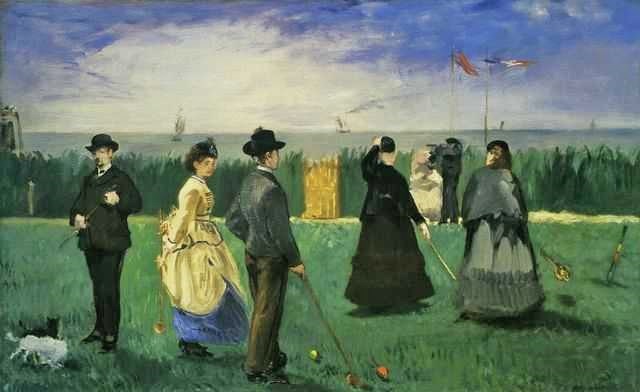 In 1882, a convention in New York of 25 clubs formed the National American Croquet Association. Croquet was introduced as an Olympic sport in the 1900 Paris games. Early 1900 American croquet leaders disagreed with many of the new English rules which outlawed mallets with heads made of rubber & had introduced the 6-wicket court layout. They kept the 9-wicket version & short handled mallets with heads of metal face on one end and rubber on the other. The Americans introduced their version of 9-wicket croquet at the 1904 Olympics in St. Louis which was won by an American but never played in the Olympics again.
1871 The Illustrated London News  Croquet Under Difficulties. 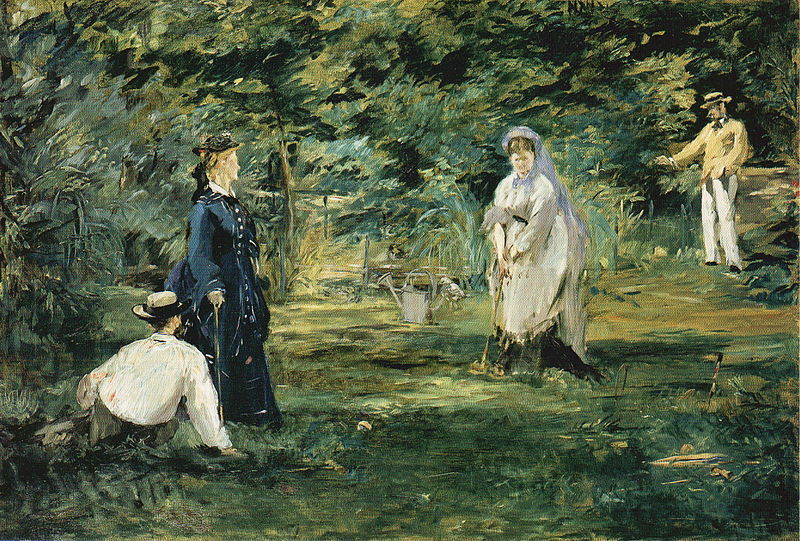 1873 Never Too Old To Play Croquet Nor Yet Too Young  August Published for Harper's Weekly, New York

1876 A game of croquet on the front lawn of Perry Guile's house in Milo, New York 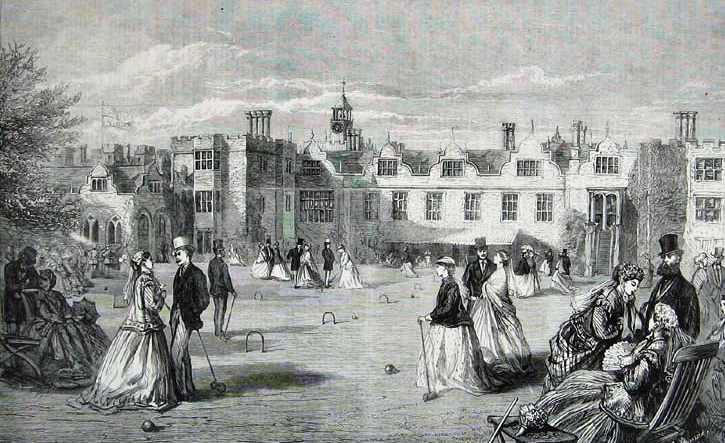 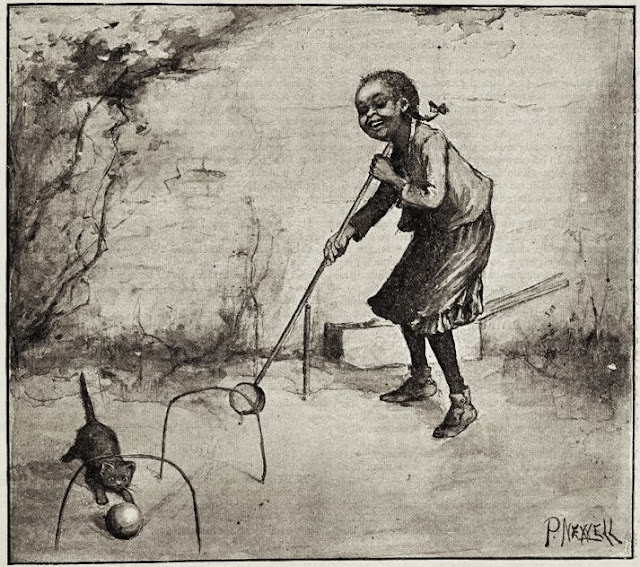 1885 A game of croquet without rules. Harper's young people. 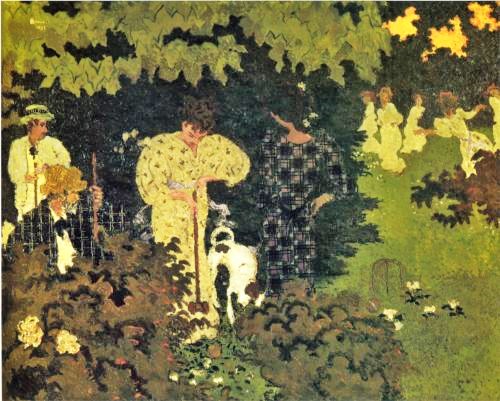 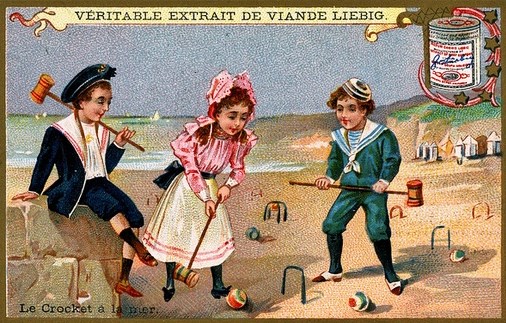 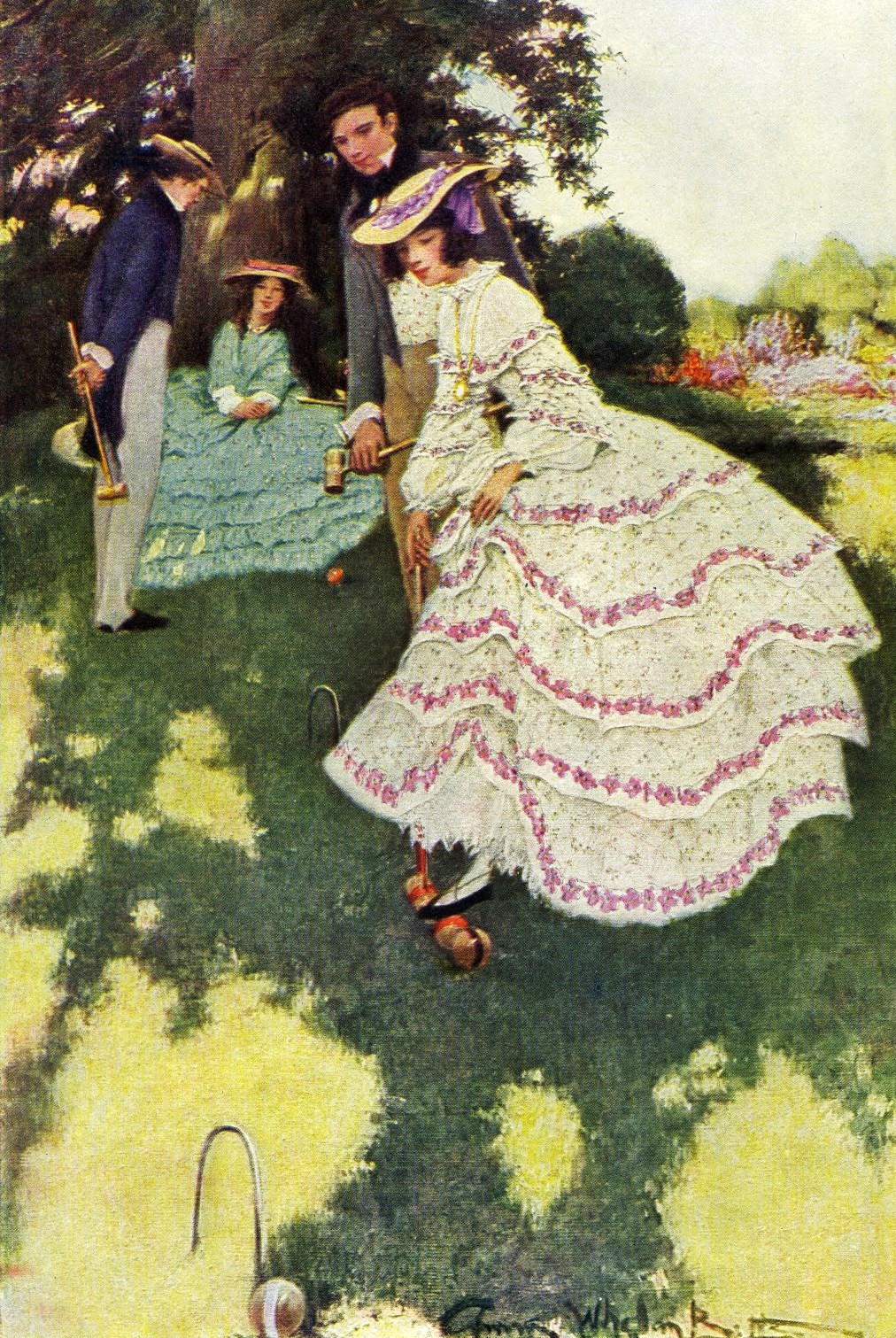 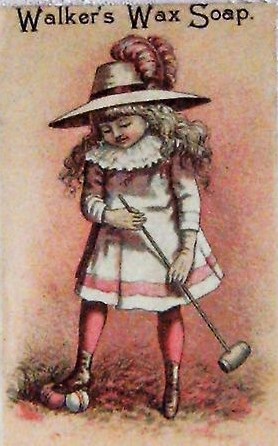 
Croquet Fashions for players and observers
Croquet grew in popularity with women during the 1860s; however, the sport was hampered by their heavy, full skirts & the crinolines worn underneath.  Many women took to looping up their skirts to prevent soiling them or brushing against the croquet balls. Designers began to have the exposed petticoats develop tabs to button up the skirts, & the hems on croquet dresses became increasingly bold & decorative. In 1864, one croquet player advised, “the dress should be looped up, or not only will it spoil many a good stroke, but with its sweeping train will probably disturb the position of some of the balls.”
1860s Walking and croquet dress, Le Diable Rose 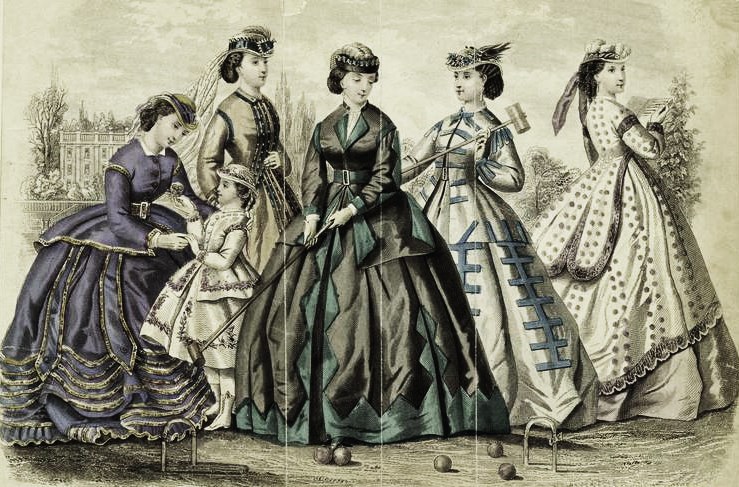 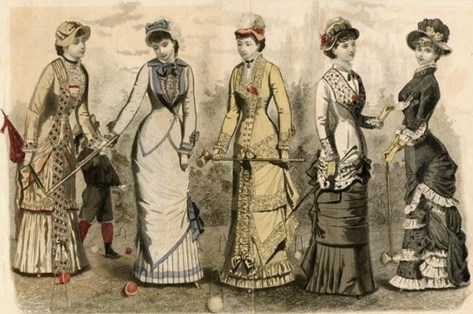 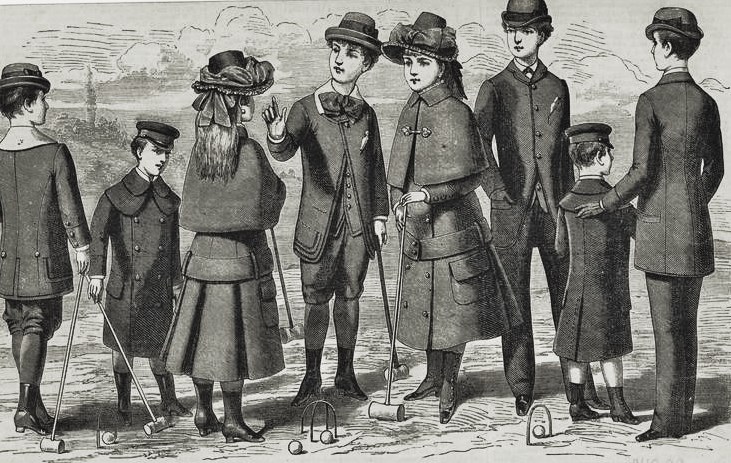 1883 Childrens Country Costumes from The Queen. 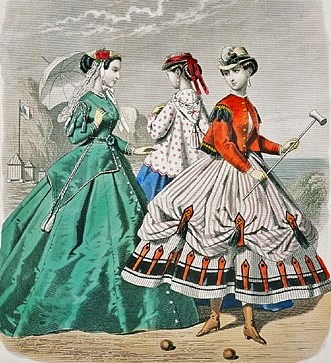 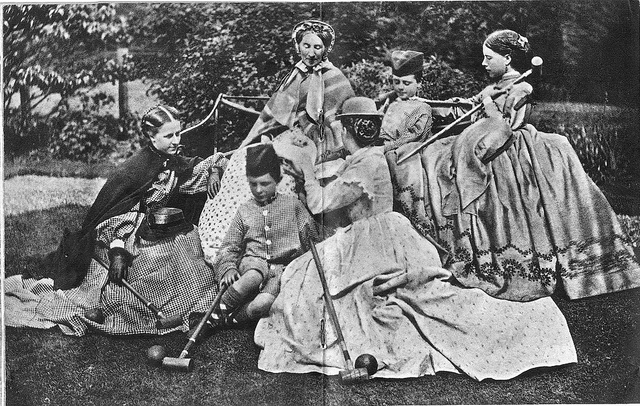 Photo of Croquet Players 1860s
Posted by Barbara Wells Sarudy at 4:00 AM

Blogging is a joy - a total extravagance, a chance to explore endless curiosities. Searching for WHY human society changes & what those living before us declare in their own words and in their design & images of themselves & of the world around them. Archeologists use science to find & explain evidence below that obvious on the surface.
Focusing mostly on gardens & women, I put together several blogs, different in the particulars but similar in the essentials. They are listed in the blogroll below. Honored to have you here -Welcome!