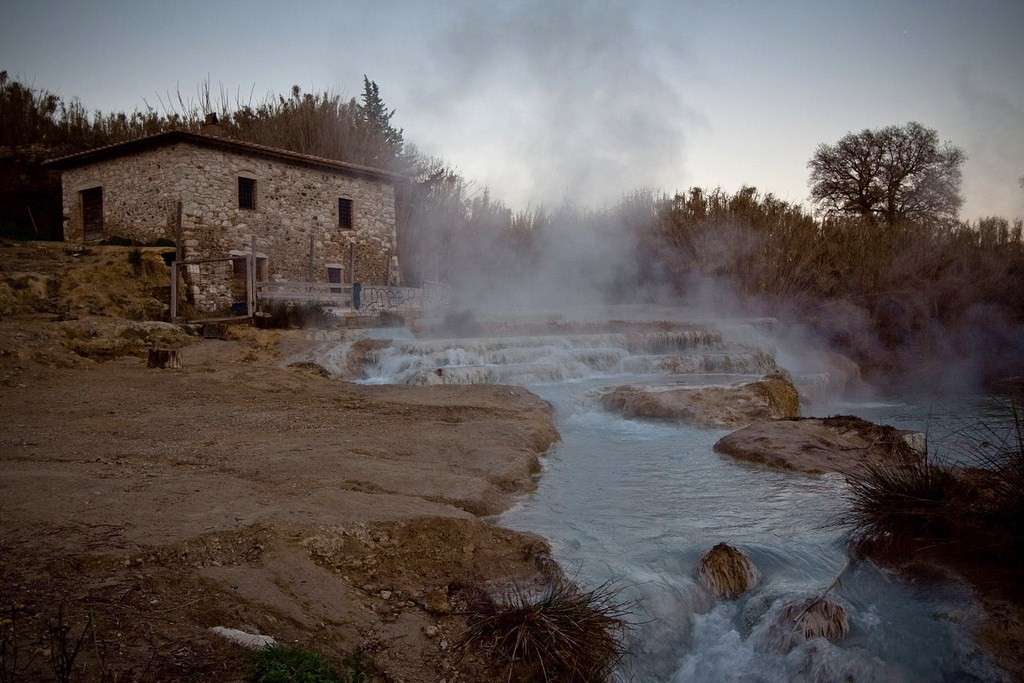 Rev. Henry Muhlenberg (1711-87) reported that large crowds of men & boys stripped naked splashing and paddling in the Delaware River at Philadelphia. Among early American settlers, William Penn's Quakers espoused healthy habits of exercise and hygiene. Told that vigorous activity for children "fits them to bear the roughest Providences,"  Quakers quickly took to swimming and bathing. One, Elizabeth Drinker, had a shower put up, tried it, and noted, "I bore it better than I expected, not having been wett all over at once, for 28 years past."

Lawrence Wright's book Clean And Decent tells of William Penn's butler, presumably a Quaker, who was not only deaf but plagued with various pains. "He leaped from his bed on a cold night, threw off his night shirt, jumped into cold water, ran naked round the garden, into the water again, twice more round the garden; then, taking 'a good swigg o brandy', back to bed-and needless to say had recovered both health and hearing by the morning."

Philadelphia boasted several public gardens featuring bathing & swimming. A proposal for publicly financed baths created a controversy on August 20, 1761, when The Pennsylvania Gazette reported that a committee of religious leaders in Philadelphia wrote a letter to the governor. "It hath been with the greatest Concern, for some Years past, that we have observed, among our Fellow Citizens, an immoderate and growing Fondness for Pleasure, Luxury, Gaming, Dissipation, and their concomitant Vices. The Impropriety as well as Ingratitude of such a Conduct, is too remarkable to be passed over... Last Winter, we heard of high Scenes of public Gaming, added to and mixed with the usual Diversions of the Season. And yet, not content with these, our Projectors of Pleasure, our Leaders in Modes and Fashions, as if they were afraid to leave themselves or their Followers one Moment for Business, or sober Conversation, or serious Reflection upon what they were sent for into this World, have set on Foot a Scheme for filling up the Summer Season also with the like Scenes of Dissipation, Idleness and Excess. The Scheme we mean (as far as it is yet avowed by them) is a large Subscription Lottery, for erecting public Gardens, with Baths or Bagnios, among us. How destructive such Places of public Rendezvous are to the Morals of a People, what they usually terminate in, and how ill suited they are to the Circumstances of this young City, and the former Character of its Inhabitants, we need not mention to your Honour...Were a hot and cold Bath necessary for the health of the Inhabitants of this City, they might at a small Expence be added to the Hospital, put under the sober Government of that Place, and kept separate from those used by the Patients; and as to a publick Place of Walking, the State House Green or Garden , by a Law of the Province, is already set apart for that Use. --- But much more than this lurks under this Scheme, and will certainly attend its Accomplishment. We well know that Gaming Tables, a House of Entertainment, Places of Drinking, and the like, make a Part of public Gardens."

Apparently, the popularity of public baths was not squashed in the Quaker city.  In 1765, John White advertised his New Bath in Northern Philadelphia, to "Accomodate Ladies and Gentlemen with Breakfasting, on the best of Tea, Coffee. amd Chocolate, with plenty of GOOD CREAM...He likewise hopes to give Satisfaction to any Person whose Health may require their going to the Bath, by his Attention and by furnishing them with Brushes and proper Towels."

One of the mineral springs in Pennsylvania attracted from 100 to 500 guests daily in the summer season.  The public bath, Yellow Springs in Chester County, Pennsylvania, was put up for auction in March of 1770 as advertised in the The Pennsylvania Gazette.  "A VALUABLE plantation...well known by the name of the Yellow Springs, situate in Pikeland township, Chester county, about 30 miles from Philadelphia, containing 150 acres, one half or more cleared, the other well timbered, and the whole well watered, by never failing streams...having thereon erected a good stone dwelling house, 2 stories high, 57 feet front, and 36 in depth, a fine piazza in the front, the whole breadth of the house, 8 or 9 feet wide, good cellars and chambers, kitchen barn, stables, and other out houses...The medicinal virtues of the springs, on the above plantation, for the cure of many disorders inwardly and outwardly, are so well known to the public, that it is thought unnecessary to mention them here. There are three bathing springs, which can be emptied or filled in a very little time, by opening or shutting a sluice; two of them are inclosed by good new frame houses, 35 feet front, and 16 feet deep. Each bath has a drawing room, and one a fireplace in it; the buildings are neat, and make an elegant appearance, having glass windows front and back, and walks, with rows of shady trees, up to the dwelling house...The dwelling house, on said plantation, is now used as a public house, and is so well accustomed as to have from 100 to 500 people daily, for the summer season, besides the unhealthy and infirm that come from all parts, and take lodgings for weeks together, for the benefit of the waters."

In 1774, Dr. Samuel Kennedy offered to rent Yellow Springs, which he had apparently purchased 4 years before, noting, "The Baths and other outhouses are in good repair...from four to six hundred persons have convened there in one day in the summer season."
The Pennsylvania Packet, and Daily Advertiser on February 20, 1790 offered to be let, "The Wigwam Tavern...on the banks of the Schuylkill...with a shower and two plungings Bath...and 7 summer houses."  And within the year, John Coyle opened his commercial garden on the Schuykill River in 1791. Coyle's Wigwam Garden featured a good restaurant with excellent coffee, a bowling green, and public baths.

In 1795, public garden owner George Esterly announced Philadelphia's Harrowgate Spring, "In the house erected over the Harrowgate waters are two shower baths and two dressing rooms and at the Chalybeate spring, is a convenient bath for plunging and swimming...The garden is in excellent order...He is determined to keep the best of liquors of all kinds. Breakfasts, dinners, teas, coffee and fruits of all kinds may be had at the shortest notice, and also excellent accomodations for boardings and lodgings."
The Bristol Baths, twenty miles north of Philadelphia in Pennsylvania, were advertised for sale in 1807 with, "plunging showers and warm baths." When the property was put up for sale again in 1811, the advertisement described, a "Mansion 112 by 33 feet; 30 lodging rooms; 12 ft piazza in front of the whole; 2 kitchens; bar room and stabling for 100 horses...ballroom 45 by 18 feet, a billiard room, mineral baths, warm baths, pump room...40 acres."
Posted by Barbara Wells Sarudy at 4:00 AM