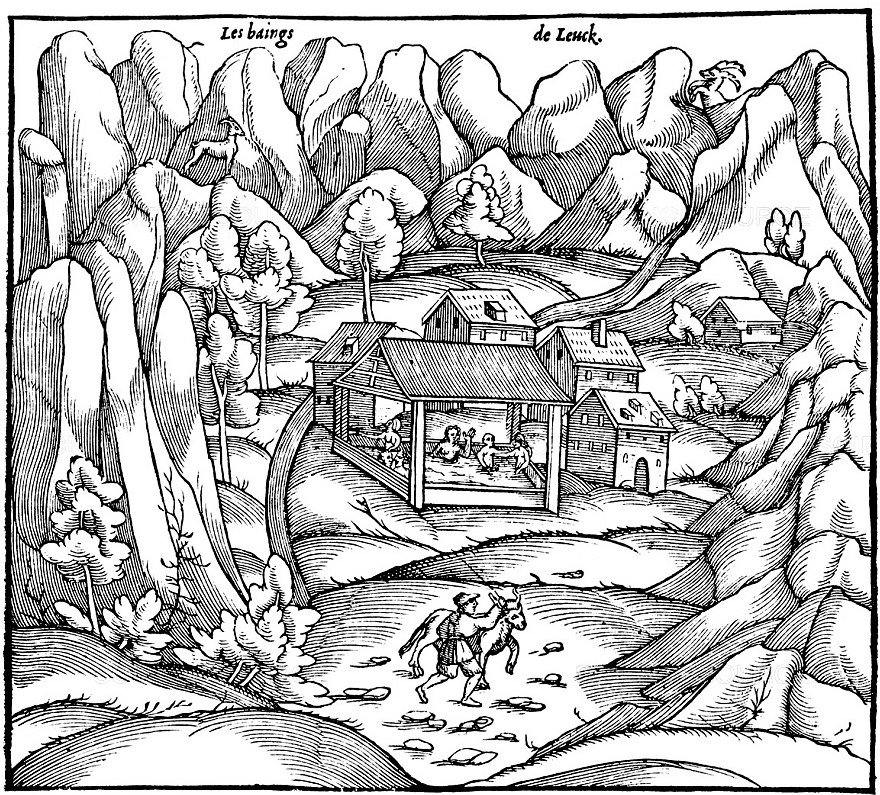 People across the globe have used geothermal hot springs and mineral waters for bathing and for improving their health for many thousand of years. Based on archaeological finds in Asia, mineral water has been used for bathing there since the Bronze Age, about 5000 years ago.

One of the first accounts of bathing in mineral springs as a healing  process rather than a simple hygiene ritual was written by ancient Greek philosopher Hippocrates, who was active between 460 and 370 B.C. Hippocrates proposed that the cause of all ailments was an imbalance of bodily fluids, and advocated that: “The way to health is to have an aromatic bath and scented massage every day.”  One of the oldest Greek archaeological sites, Olympia, was home to several hot baths constructed over a period of nearly 500 years (470 BCE–600 CE). The Leonidaion, Kladeos, and Kronios baths included intricate mosaic floors, opulent marble revetments, hot and cold pools, atriums, and even private baths.

Many hot springs have been used in connection with religious rites in Egypt and by the Jews of the Middle East. Ritual bathing is part of ancient Jewish culture. Ritual cleansing baths (mikvot) from the classical period have been found in archaeological digs at multiple sites, including Masada.  Situated between two volcanic belts, Japan offers countless natural thermal baths. Their tradition of public bathing dates back at least to A.D. 552 and to the dawn of Buddhism, which taught that such hygiene not only purified the body of sin but also brought luck.

In early recorded history, the primary use of curative baths was noted to heal the wounds of Roman soldiers during the reign of Caesar Augustus from 27 B.C. to 14 A.D. Asclepiades, a Greek physician who worked in Rome, prescribed hydrotherapy for both therapeutic and preventative purposes. There were others that attributed healing and health to taking the waters such as Pliny the Elder (23-79 AD) and Galen (131-201 AD).

At this time, there were approximately 170 baths in Rome, but by 43 A.D. citizens of Rome began to view baths as form of rest and relaxation for all. Starting in 33 BCE, and throughout the the reign of Augustus (31 BCE–14 CE), Rome boasted approximately 170 public baths. By the onset of the 5C, that number grew to 856, as citizens of Rome began to view baths as a way of providing rest, relaxation, and solace to all people, not just those weary from war. Rome produced 3 types of baths. Baths at home (balnea), private baths (balnea privata), and state funded public baths (balnea publica). The aqueducts provided enough water, not hot, so that every person in Rome could use 1400 liters per day. At the height of the Roman bathing culture these public bathing facilities grew into huge complexes with the capacity for thousands of people.

In 70 CE, while occupying England, the Romans built a spa around the hot springs at Bath, the first of its kind known in Britain; and they erected a temple nearby to honor the goddess Minerva. The Romans also built hot baths in their European colonies such as Vichy, France, and Aachen, Germany. The baths were an integral part of social life for the residents of those Roman communities, and many of them remained even after the cities were no longer part of the Roman empire.

Speculation exists as to where the term spa originated.  One theory is that spa in Latin is an acronym of “salus per aquae” meaning “health from water.” Others theorize that the term spa comes from a small Belgian village called Espa (or fountain) where hot mineral springs containing iron-bearing waters were used by Roman soldiers to treat aching muscles and wounds from a battle. In 1326, Collin le Loup, an ironmaster from Liège, Belgium, discovered the chalybeate springs in Espa, and promoted around these springs, where a famous health resort eventually grew as the term “spa” came to refer to any health resort located near natural springs. Whatever the origin, the oldest Roman spa still in existence today can be found in Merano, Italy.
Posted by Barbara Wells Sarudy at 4:00 AM