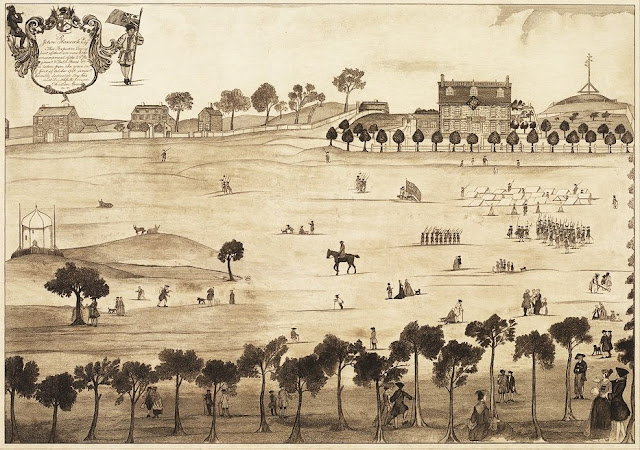 A Prospective View of the Boston Commons 1768

The Mall in Boston, Massachusettes was planted with an avenue of trees early in the 18th century. In of December 2, 1787, Lt. John Enys recorded in his journal, "After Dinner we took a walk on the Mall as it is called which is a very excellent Gravel walk about half a Mile in Length with Trees on each side which is kept in very good order and is by far the best thing of the kind I have yet seen in America, but the weather was too cold to tempt any of the Belles of the place from the fire side. From hence we went to Beacon Hill from whence we had a Charming View of the town and harbour."

One of the earliest and most important avenue of trees was the road leading to the Governor's Palace in Williamsburg, Virginia.   In the Virginia Council Journal it was recorded on December 15, 1737, for Williamsburg, ordered "that there be paid to Mr Philip Finch the sum of ten pounds for laying and planting the Avenue to the Governors House." An avenue of symmetrically aligned trees planted 50' apart reflected the strong Baroque axial scheme of the Palace and its gardens. The trees were the soldiers standing erectly in a line leading visitors to have the proper respect by the time they reached the grand palace gates. The tree-lined mall form of the Palace Green would be copied throughout the colonies. 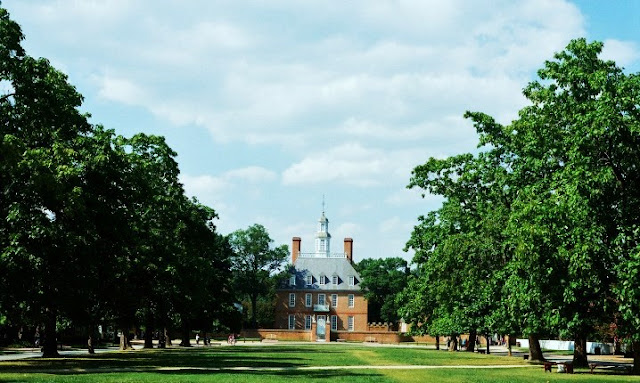 Rows of trees replanted at the Governor's Palace in Williamsburg, Virginia

In 1765, the Virginia Council Journal reported the Governor's Palace as "An elegant seat being enclosed with beautiful walks of trees." Another report in 1770, noted that "the approach is through an avenue of catalpas." But in 1775, the journal reported that "carriage roads bordered with lindens that Dunmore had imported from Scotland."

Farmer working in his field near the Moravian settlement of Salem, North Carolina. Watercolor, 1787, by Ludwig Gottfried von Redeken.  The Moravians planted rows of trees lining the roads to their settlements and along the streets withing their towns.

The Records of the Moravians on the Town of Salem Directing Boad from 1763-1792 in Salem, North Carolina reported in March, 1769, "trees were planted on both sides of the main street of Salem by the Gemein Haus Square."  The next year, on February 15, when they were laying out the path to the graveyard, Lung the gardener took along a load of trees to be set out to form an avenue. Cedar Avenue became a landmark of the Salem settlement. 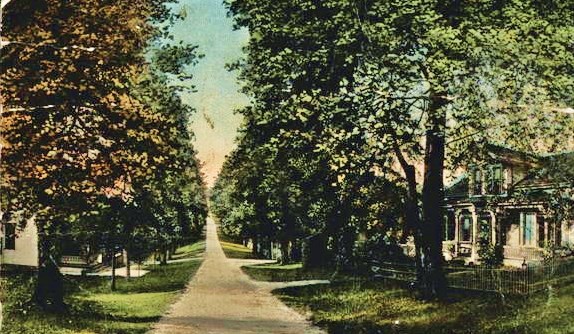 Cedar Avenue to the Graveyard at Salem, North Carolina 1914

During the Revolution a French visitor noted that avenues of trees lined the public streets of Charleston, South Carolina, as well. He wrote in 1777, "There are trees along most of the streets, but there are not enough of them to make it pleasant promenade along the streets in the heat of the day."

Visiting Milanese botanist Luigi Castiglioni reported seeing Albany, New York, in 1785, "The streets...are very wide, adorned with trees, paved in part with cobblestones, and some of them furnished with a sidewalk."

When the Revolution was over, the new nation's first president, George Washington, viewed Charleston's streets in 1791, from the balcony of St. Michael's Church and wrote in his diary, "the whole is seen in one view, and to advantage, the Gardens and green trees which are interspersed add much to the beauty of the prospect."

During the 1790s, in Philadelphia, Pennsylvania, visitor Moreau de St. Mery wrote in his diary, "Several streets have trees, usually elms, planted on the outer edge of the sidewalk...Some persons considered them helpful in hot weather; others believed they prevented the free circulation of air and attracted insects, especially mosquitoes. Since then Italian poplars have been put at both ends of each street, as well as on all sides of the city's principal square on Market Street between the Delaware and the Schuylkill...Trees have been planted on both sides of every street, the Italian poplar being the one most in favor." 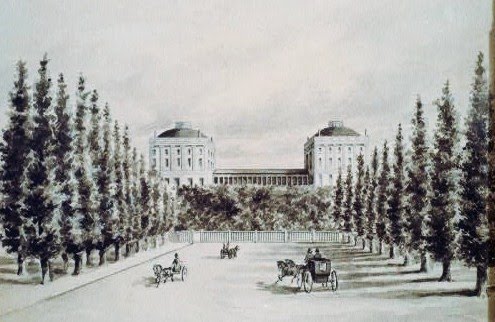 Depiction of the United States Capitol before the fire of 1814.

The 1897 Records of the Columbia Historical Society in Washington, DC contain letters to President George Washington from Pierre C L'Enfant, when he was laying out the streets & buildings for the new capital at Washington DC, explaining his proposed use of avenues.  On June 22, 1791, L'Enfant sent the following to George Washington, "I first determined some principal points to which I wished making the rest subordinate I next made the distribution regular with streets at right angle north-south and east west but afterwards I opened others on various directions as avenues to and from every principal places, wishing by this not merely to contrast with the general regularity nor to afford a great or variety of pleasant seats and prospect as will be obtained from the advantageous ground over the which the avenues are mostly directed but principally to connect each part of the city with more efficacy by, if I may so express, making the real distance less from place to place in menaging on them a reisprocity of sight and making them thus seemingly connected promot a rapide stellement over the whole so that the most remot may become an adition to the principal while without the help of these divurgents communications such setlements if at all attempted would be languid, and lost in the Extant would become detrimental to the main establishment.

"Several of these avenues were also necessary to effect the junction of of several out road which I concluded essential to bring central to the city in rendering these road shorter as is done with respect to the bladensburg and Eastern branche Road made above a mile shorter besides the advantage of their leading from the direction given immediately on the warfs of georgetown without passing the hilly ground of that place whose agrandissement if will consequently check while it will accelerate those over Wik creek on the city side the which cannot help spreading soon all along of these avenues forming of themselves a variety of pleas ant ride and being combined to injure a rapide Inter course with all the part of the City to which they will serve as does the main vains in the animal body to diffuse life through smaller vessels in quickening the active motion to the heart...I placed the three grand Departments of State contigous to the principle Palace and on the way leading to the Congressional House the gardens of the one together with the park and other improvement on the dependency are connected with the publique walk and avenue to the Congress house in a manner as most form a whole as grand as it will be agreeable and convenient to the whole city." 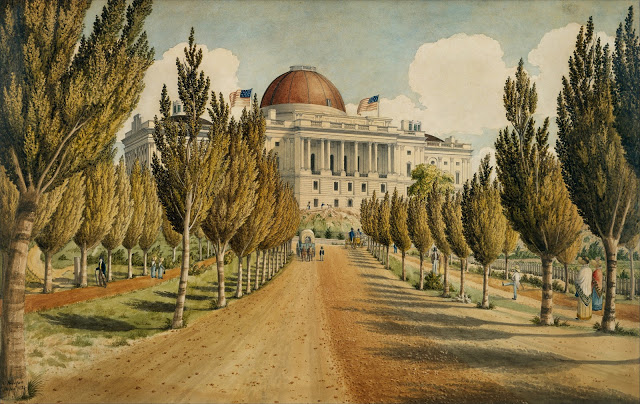 1824 Charles Burton's West Front of the Capitol of the United States.

When Thomas Twinning viewed the new capitol of the United States in the midst of its building, he recorded of Washington DC in the 1790s, "After some time this indistinct way assumed more the appearance of a regular avenue, the trees here having been cut down in a straight line. Although no habitation of any kind was visible, I had no doubt but I was now riding along one of the streets of the metropolitan city. I continued in this spacious avenue for half a mile, and then came out upon...the centre of the city...Looking from where I now stood I saw on every side a thick wood pierced with avenues in a more or less perfect state...all the avenues converged to that point."


Avenues & alleys planted early in the 18th century began to die in the 19th century depending on the type of trees initially planted. The Records of the Moravians in Salem, North Carolina, reported in 1815 that "The alley of catalpa trees along the garden of the Boarding School and farther south has died out partly."


Nicholas, Garrison Jr. - View Of Bethlehem, One Of The Brethren's Principal Settlements In Pennsylvania, North America 1757


Posted by Barbara Wells Sarudy at 4:00 AM