When the Dutch & later the English settled at the southern tip of Manhattan in the 17th century, a communal pasture existed south of Collect Pond known as the "Flats," which was also where locals gathered to witness public executions, some of the most highly anticipated entertainment events of the period. The Flats would become City Hall Park.  Bowling Green served as the community market place & parade ground. It still survives, in continuous use for almost 400 years.

In 1686, New York Governor Thomas Dongan issued an early city charter officially placing all "waste, vacant, unpatented and unappropriated lands" in municipal care, under the jurisdiction of the Common Council.  These "unappropriated lands" included the outdoor marketplaces & public commons that later became the first city parks. In addition to Bowling Green & City Hall Park, land called the Battery, at the southern tip of Manhattan, served as an open area for the batteries of cannon protecting the city at water's edge.  See the history of The Battery here.

These early publically-owned parks were centers of early New York life. Bowling Green sits at the beginning Broadway, the main trade trail that extended north through Manhattan & the Bronx. Broadway also serves as City Hall Park's western boundary.  Bowling Green Park became the first officially-sanctioned town park in the British colonies, when it was established as an official park by the Common Council on March 12, 1733. The English fenced in & leased this green plot to several citizens for use as a “bowling green.”  Bowling Green actually was an early public-private partnership — it was leased at an annual rent of one peppercorn to John Chambers, Peter Bayard, & Peter Jay, who were responsible for improving the park with grass, trees, and a wooden fence "for the Beauty and Ornament of the Said Street as well as for the Recreation & Delight of the Inhabitants of this City."

Unknown artist. A statue of King George III in Bowling Green being toppled on July 9, 1776

Before the outbreak of hostilities between the mother country and its colonies, a metal statue of King George III astride a horse had been erected in Bowling Green. The gilded lead statue of King George III, commissioned by grateful New York City merchants after the repeal of the Stamp Act, was one of the first statues placed in a colonial city park when it was placed in the center of Bowling Green Park in 1770. In 1771, a surviving wrought iron fence was erected around the irregular oval of the Bowling Green to protect the park & its royal monument, which was destined to fall at the hands of the patriots in July of 1776.  Five days after the signing of the Declaration of Independence, horse and rider were dragged from the pedestal and broken to bits. The metal was melted to create, according to one account, 42,000 bullets for the patriots to use against the British. 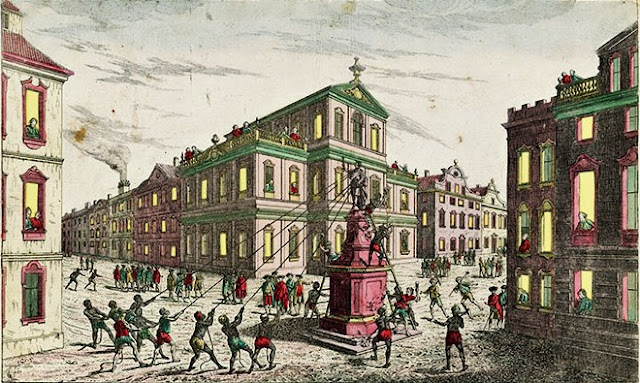 During the Revolution (1776–1783) the British controlled New York and used a debtor's prison on the site of City Hall Park to hold Revolutionary prisoners of war, executing 250 patriots on gallows there. After the war, the now hallowed City Hall Park was improved with trees & grass after 1784; and by 1803, the popular commons & gathering place was referred to as "The Park."

The first public space actually purchased by the City specifically for use as a public park was Duane Park, located at Hudson & Duane Streets in Manhattan. Trinity Church sold the triangle of land to the City fathers for five dollars in 1797, on the condition that it be fenced & landscaped "as promotive of health and recreation."

The New York City Commissioners' Plan of 1811, which mapped out the streets of Manhattan, designated several open space parks in the crowded town, including Union Square, Tompkins Square Park, Madison Square Park & Marcus Garvey Parks. "It may be a matter of surprise," the commissioners commented in remarks accompanying their 1811 plan for the city, "that so few vacant spaces have been left...for the benefit of fresh air."
Posted by Barbara Wells Sarudy at 4:00 AM