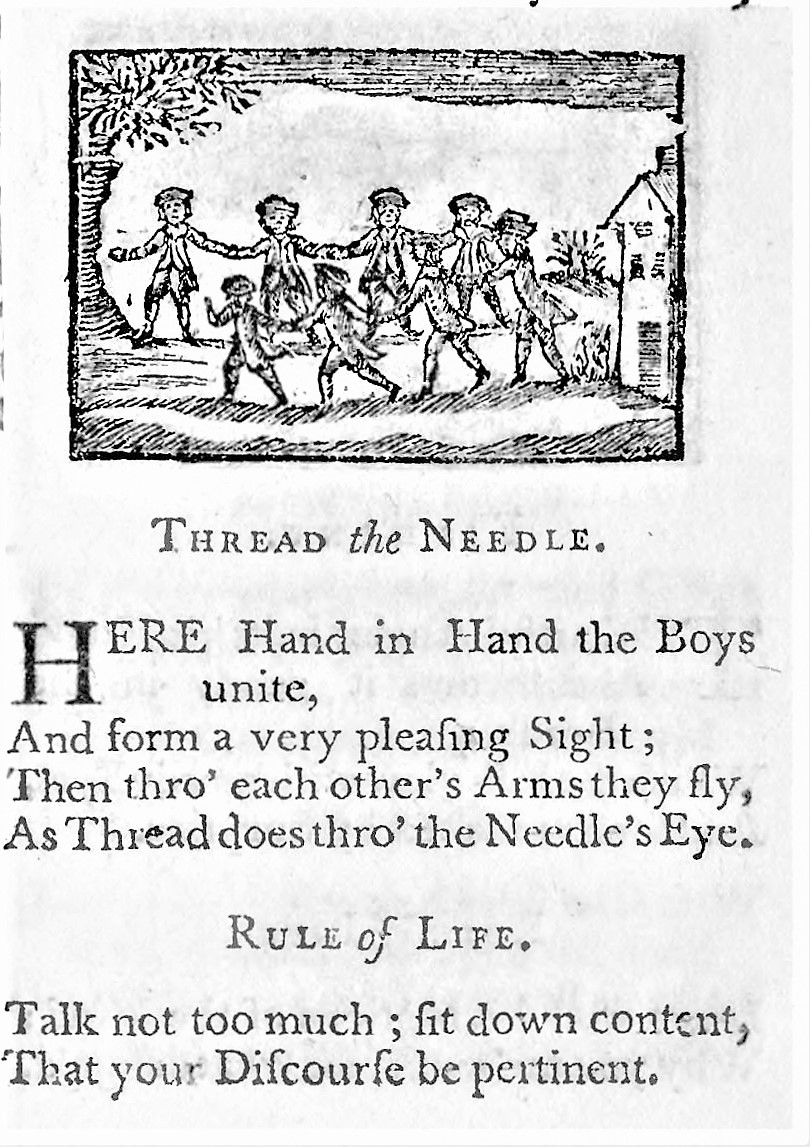 1744 Thread the needle A Little Pretty Pocket-Book, intended for the Amusement of Little Master Tommy and Pretty Miss Polly with Two Letters from Jack the Giant Killer by John Newbery.

Tag was a favorite game of the young & the physically fit in Colonial America because no special equipment was needed & almost everyone could participate. There are many different ways to play tag, and some versions have their own names. Some of the favorite variations in Colonial America included squat tag, turn cap, thread the needle, stone poison, and How many miles to Babylon?

Games, such as battledore and shuttlecock (badminton), thread the needle, tag, leapfrog, and hopscotch could be, and often were, played with members of both sexes. Given that the median age of the Revolutionary generation was sixteen, games provided a means through which sexual mores could be tested and learned. Charades, hide-and-seek, and blindman's bluff were popular heterosocial activities, but they usually were given moral intent by popular advice writers.

On June 1786, a newspaper article described a Whit Sunday Fair at Greenwich in London. It was a rough event, bringing together sailors, prostitutes & "runagate apprentices" who are all "drinking & smoaking - dancing & boxing - singing & shrieking - praying & cursing."  Another description is in these lines, "And now the sport begins - Thread my needle - Kiss in the ring - & roll on the hill..."

In "Thread the Needle" games, it looks like participants are the thread and needle making stitches.  The point of the game is to try & do this many times without breaking the chain.

Game Instructions
1. The participants stand in a line, side by side, while holding hands throughout the entire game.
2. The two players at one end of the line ("A" and "B") hold their joined hands up forming an arch.
3. The participant at the other end of the line ("Z") goes under the arch… and all those in between follow.
4. Then player "B" holds up hands with player "C" forming an arch.
5. Player "Z" again goes under the arch and all of the participants between him and "C" follow under the arch.
6. The game continues like this until everyone is facing in the opposite direction with arms crossed in front.

A second version of this game was popular in Colonial British America & the early nation & includes a Biblical chant. Everyone holds hands & forms a line the two people at the head of the line chant "How many miles to Babylon?" The end two people chant in response "Three score & ten." The conversation continues "Can I get there by candle light?" "Yes, & back again." "Then open the gates with mere ado & let the King & his men pass through. The end couple then raises their hands up in an arch & the game is played the same as the first version.