Symbolism in Public Spaces -The Masons

Masonic symbols often appeared in Delacroix's fireworks spectaculars. He presented a special celebration for St. John's Day in 1799 for the members & supporters of the Grand Masonic Lodge of New York City. At his New Vauxhall Garden he offered a fireworks display of Masonic emblems. He once again exhibited Masonic fireworks set against a painted backdrop representing the Temple of Solomon again in 1802 & 1803 to celebrate St. John's Day. 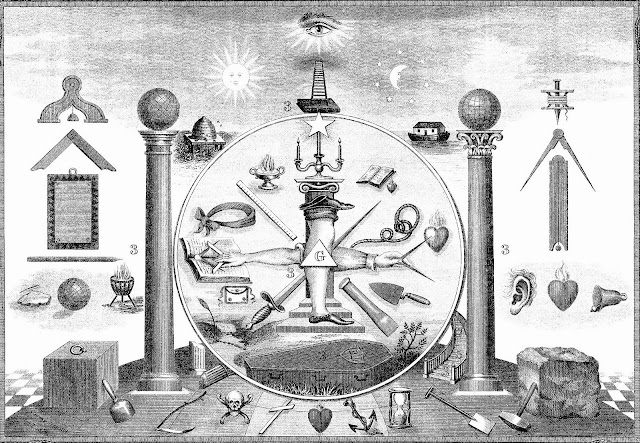 Freemasonry, still alive & well, is a fraternal organization that uses the metaphors of stonemasons' tools & implements, against the allegorical backdrop of the building of King Solomon's Temple, to convey "a system of morality veiled in allegory and illustrated by symbols."

A poem known as the "Regius Manuscript" has been dated to approximately 1390, & is the oldest known Masonic text. There were Masonic lodges in Scotland as early as the late 16th century & references to lodges in England followed in the mid-17th century.

During the British American colonial period, the Grand Lodge of England was founded on 24 June 1717, when 4 existing London lodges met for a joint dinner. The 18th century English penchant for organization & control led to this pleasant dinner get-together rapidly expanding into a regulatory body, which most English lodges joined. The Grand Lodges of Ireland & Scotland were formed in 1725 & 1736 respectively. Freemasonry was exported to the British American colonies by the 1730s – with the chartering offspring "daughter" lodges (a strange term for a meeting place that allowed no women) & the organizing various provincial grand lodges. 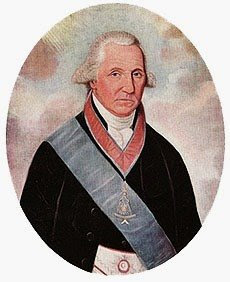 George Washington was a little leary of making himself or the masons commercial symbols.  In July 1792, Washington turned down a request for a sitting from American artist William Joseph Williams, telling Governor Henry Lee of Virginia: "I am so heartily tired of the attendance which, from one cause or another, I have bestowed on these kind of people, that it is now more than two years since I have resolved to sit no more for any of them; and have adhered to it; except in instances where it has been requested by public bodies, or for a particular purpose (not of the Painters) and could not, without offence, be refused. I have been led to make this resolution for another reason besides the irksomeness of sitting, and the time I loose by it, which is, that these productions have, in my estimation, been made use of as a sort of tax upon individuals, by being engraved, and that badly, and hawked, or advertised for Sale." Williams then offered to paint Washington's portrait for the Alexandria-Washington Masonic Lodge No. 22 of the Ancient, Free, and Accepted Masons in Alexandria, Virginia.  Lodge officers wrote Washington in 1793 that it would be " a source of the most refined gratification the tracing out and contemplating the various ornaments of his character in the resemblance of his person." Williams's portrait shows Washington as a Virginia past master, with Masonic regalia and jewels. Williams's careful depiction includes a scar on Washington's left cheek, smallpox scars on his nose and cheeks, and a mole under his right ear.


After the American Revolution, independent grand lodges formed themselves within each state. Some talked of organizing an over-arching "Grand Lodge of the United States," with George Washington (who was a member of a Virginia lodge) as the first Grand Master, but the idea was rejected. The various state grand lodges did not wish to diminish their authority by agreeing to such a body. It was the familiar American battle between centralized governance & state's rights. 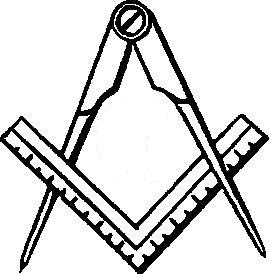 Not to be outdone by his fellow countryman & his greatest competitor, New York City garden owner Joseph Corré offered in fireworks "a new representation of the five points of Masonry" hoping to attract the numerous members of the city's Masonic lodges just prior to St. John's Day in 1800.

In newly democratic America, garden owners targeted their morality spectaculars at everyman, not just the gentry. Garden entrepeneurs aimed their emblems, symbols, & spectaculars to the common working man--the mechanics & masons. This focus allowed the public pleasure garden proprietor in the new nation to exhibit his egalitarian ideologies & to attract a larger paying audience to his commercial garden.
Posted by Barbara Wells Sarudy at 4:00 AM