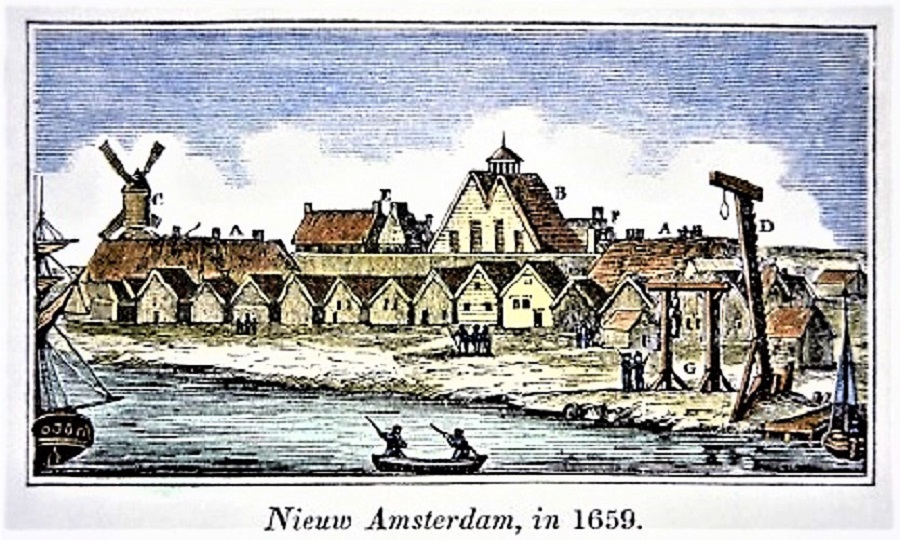 Skating in 17C North America arrived with the Dutch settlers in New York . Upon visiting colonial New Netherland - New York, English clergyman Charles Wooley wrote in 1678, "And upon the Ice its admirable to see Men &amp; Women as it were flying upon their Skates from place to place, with Markets upon their Heads &amp; Backs." 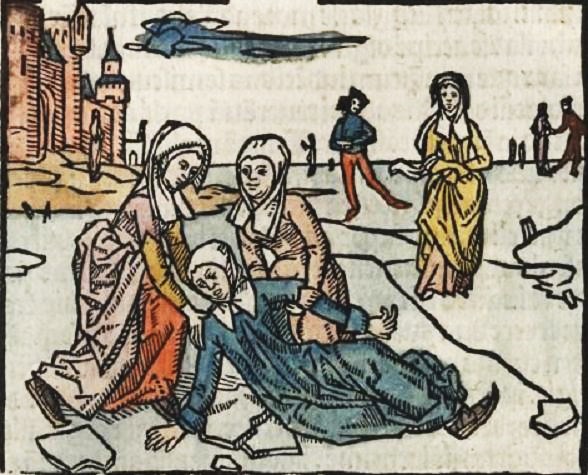 Saint Lidwina is a Dutch saint who loved to go ice skating, until she fell and broke her rib. This 1498 image of a real skating scene is found in the book 'Vita alme virginis Lydwine' that was written by father Jan Brugman. The print depicts the unfortunate fall of the canonized Lydwina of Schiedam  (1380-1433) a hundred years before.

Watching the Olympics from Russia today, I began to wonder when women's skiing & ice skating events began in the Olympics & when women first began to ice skate.  The first Olympic figure skating events were part of the 1908 Summer Olympics. Events for both men & women took place at that Olympics.  Colonial American women were ice skating during the 17C.
Woodcut from Olaus Magnus. Swedish Olaf Mansson (Swedish historian, 1490-1557) wrote, "Among the Sami, both men & women take part in hunting & fishing." Winter scene from Finnmark. Three sami with skis, participating in the hunt. The middle hunter is a woman.  These wooden boards were used for skiing.

Ice skating by young men is recorded in London in the 12C.  The 1st English mention of ice skating is found in a biography of Archbishop of Canterbury Thomas à Beckett written by his former clerk William FitzStephen around 1180, in his "description of the most noble city of London."  The account reads: "when the great fenne or moore (which watereth the walles of the citie on the North side) is frozen, many young men play upon the yce, some striding as wide as they may, doe slide swiftly...some tye bones to their feete, & under their heeles, & shoving themselves by a little picked staffe, doe slide as swiftly as birde flyeth in the aire, or an arrow out of a crossbow. Sometime two runne together with poles, & hitting one the other, eyther one or both doe fall, not without hurt; some break their armes, some their legs, but youth desirous of glorie, in this sort exerciseth it selfe against time of warre..."
Hendrick Avercamp (Dutch artist, 1585–1634), Winterlandschap met schaatsers. c 1608 (detail).  This crowded winter scene presents a cross-section of Dutch society enjoying a wide range of winters sports, on the frozen waterways.

There is some confusion about where women first began to ski & skate.  The Dutch believe that ice skates were a Dutch invention.  Scandinavians, however, claim that ice skating was introduced in the Netherlands by their Viking ancestors who visited the European coasts around 800. They think the art of ice skating derived from the Nordic custom to prevent people from sinking in loose snow by binding boards under their boots. This custom should have resulted in both skiing & ice skating.
Hendrick Avercamp (Dutch artist, 1585–1634), Winterlandschap met schaatsers. c 1608 (detail).

The discovery during the 19C of ancient bone skates in Germany, Sweden, Switzerland, the Danube valley & England suggests that ice skating may be much older than 1,700 years.  A study by Federico Formenti of the University of Oxford suggests that the earliest ice skating happened in southern Finland more than 3000 years ago.
Adriaen Pietersz van de Venne (Dutch painter, 1589-1662), Autumn 1625 detail

The first skates were flattened bone that was strapped to the bottom of the foot. The oldest pair of skates known date back to about 3000 B.C., found at the bottom of a lake in Switzerland. The skates were made from the leg bones of large animals, holes were bored at each end of the bone & leather straps were used to tie the skates on. An old Dutch word for skate is "schenkel" which means "leg bone."
Adriaen Pietersz van de Venne (Dutch painter, 1589-1662), Winter 1625 detail

Around 1500, the Dutch added a narrow metal double edged blade, making the poles a thing of the past, as the skater could now push & glide with his feet (called the "Dutch Roll").  In the Netherlands, all classes of people skated. Ice skating was a way people traveled over the canals in the winter months.
La Hollandoise sur les patins after Cornelis Dusart (Dutch artist, 1660-1704)

James II (1633-1701) helped introduce ice skating to the British aristocracy in the late 1600s. In 1742, the Edinburgh Skating Club, the 1st British figure skating club, was formed in Scotland. To gain membership in the club it was necessary for the skater to be able to skate a complete circle on either foot & to jump over one, then two & then 3 hats placed on the ice.  The 1st English instructional book concerning ice skating was published in London in 1772. The book, written by a British artillery lieutenant, Robert Jones, described basic figure skating forms such as circles & figure eights. 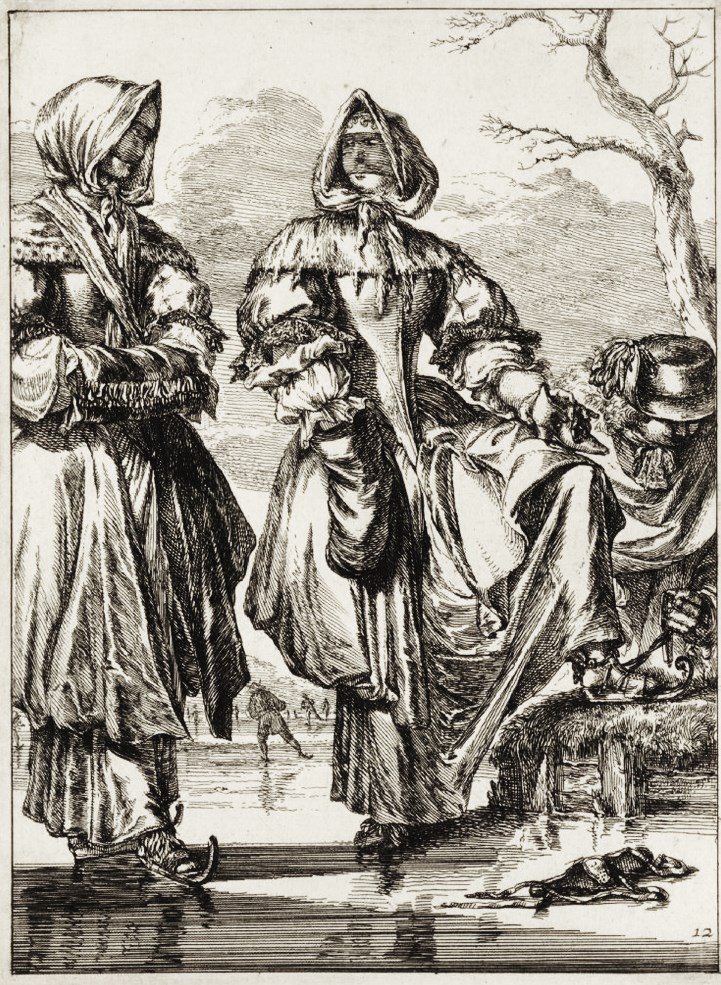 By the 1730s, images of women getting help from a gentleman to put on their skates become popular in Europe. 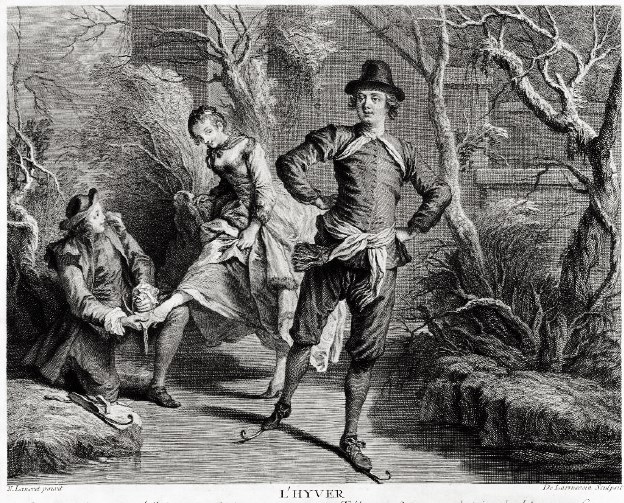 An eye-witness recorded the London frost of the 1680s: "On the 20th of December, 1683, a very violent frost began, which lasted to the 6th of February...the Thames was so frozen that a great street from the Temple to Southwark was built with shops, and all manner of things sold." John Evelyn (1620-1706) noted, "Coaches plied from Westminster to the Temple, and from several other stairs too and fro, as in the streets, sleds, sliding with skates, bull-baiting, horse and coach races, puppet plays and interludes, cooks, tippling and other lewd places, so that it seemed to be a bacchanalian triumph, or carnival on the water."

When the Thames was not frozen over, early Londoners skated on the frozen marshes of Moorfields, just north of the old walled city. Archaeologists working on London's recent Crossrail dig have found medieval ice skates. By the middle of the 18C, skating in Hyde Park in London had become a popular winter pastime. 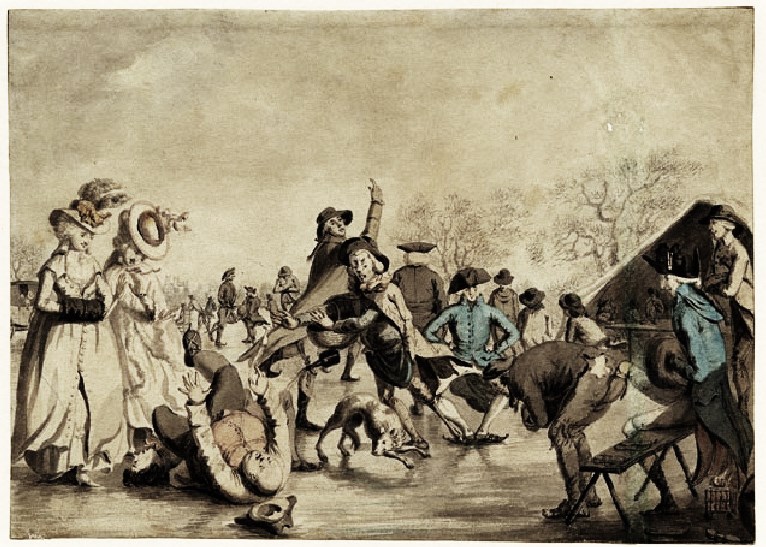 Pennsylvania-born lawyer Alexander Graydon (1752-1818) was a Captain in the Revolutionary Army & Delegate to the 1790 Pennsylvania Constitutional Convention.  Graydon was obviously aware of the New York men & women who carried their wares on their heads as they skated from place to place, when he wrote of figure skating in 18C Philadelphia in his 1811 "Memoirs of a life, chiefly passed in Pennsylvania: within the last sixty years" Graydon wrote, "With respect to skating, though the Philadelphians have never reduced it to rules like the Londoners, nor \ connected it with their business like Dutchmen, I will yet hazard the opinion, that they were the best & most elegant skaters in the world. I have seen New England skaters, Old England skaters, & Holland skaters, but the best of them could but make " the judicious grieve."
The Pleasures of Skaiting - or, a View in Winter from orig by John Collet pub by Carington Bowles, London c 1780

Graydon continued, "I was once slightly acquainted with a worthy gentleman, the quondam member of a skating club in London, & it must be admitted, that he performed very well for an Englishman. His High Dutch, or, as he better termed it, his outer edge skating, might, for aught I know, have been exactly conformable to the statutes of this institution: To these he would often appeal; & I recollect the principal one was, that each stroke should describe an exact semicircle. Nevertheless, his style was what we should deem a very bad one. An utter stranger to the beauty of bringing forward the suspended foot towards the middle of the stroke, & boldly advancing it before the other, at the conclusion of it, thus to preserve, throughout his course, a continuity of movement, to rise like an ascending wave to its acme, then, gracefully like a descending one, to glide into the succeeding stroke without effort, either real or apparent—every change of foot with this gentleman seemed a beginning of motion, & required a most unseemingly jerk of the body; an unequivocal evidence of the want of that power, which depends upon a just balance, & should never be lost—which carries the skater forward with energy without exertion; & is as essential to his swift & graceful career, as is a good head of water to the velocity of a mill wheel. Those who have seen good skating will comprehend what I mean, still better those who are adepts themselves; but excellence in the art can never be gained by geometrical rules. The two reputed best skaters of my day were General Cadwallader, & Massey the biscuitbaker; but I could name many others, both of the academy & Quaker school, who were in no degree inferior to them; whose action & attitudes were equally graceful."

Charles Willson Peale (American artist, 1741-1827) John and Elizabeth Lloyd Cadwalader with their daughter Anne.  John Cadwalader (1742-1786) was a commander of Pennsylvania troops during the American Revolutionary War; and apparently, he was a fine skater.
Posted by Barbara Wells Sarudy at 4:00 AM