Yesterday the Barnum & Bailey Circus announced that it will cease performances in the USA in May.  The circus has a long history from its beginnings in ancient Rome to its appearance in the 1720s British American colonies.

In Ancient Rome, the circus was a building for the exhibition of contests, where bear baiting was a popular draw. The circus of Rome probably was a reflection of the Greeks, who enjoyed exhibitions of animals as traditional attractions. The Roman circus consisted of tiers of seats, lower seats & boxes were reserved for persons of rank; however, the circus was the only Roman public spectacle at which men & women were not separated.  After the fall of Rome, animal trainers with their contests & exhibitions traveled between towns throughout Europe, performing at local fairs.

By the mid- 18th century, outdoor taverns in the British American colonies served as the venue for special performances & curiosities. Popular events drew crowds. Tickets were sold by tavern keepers who advertised & organized the events & provided space for performances.  Gambling on special presentations was common.  Gambling was such a probem in the early colonial South, that the Virginia General Assembly set a 10 shilling fine for gaming with cards or dice at their first session in 1619.  Unlawful games included bear baiting, bowling, cards, cockfighting, and dice.

In the summer of 1767, New Yorkers were tempted to a little bear baiting at Ranelagh Garden. One English visitor wrote "In the evening we made a party to Ranelagh Gardens. There was a Bear chained to a ring near the house, which seemed to be uncommonly docile and tractable: I took the liberty of taking Bruin by the ears, which he instantaneously resented by making a snatch and bite at my right leg: but I luckily sprung clear of him, and thought myself exceedingly well off with a good silk stocking torn, the calf of my leg much scarified, and a general laugh against me: But Bruin did not reign long, for a few days after he made a more successful snatch at a black Boy, who he killed on the spot, and was the next minute shot through the head."

In the The Pennsylvania Gazette of November 10, 1773, a letter reminding citizens of the vices of the city decided,  "to shew the sense of the first settlers of this province upon the subject, it may be profitable to recite part of the 37th of the laws agreed upon by the Governor and Freemen in England, shortly after obtaining the provincial charter, which is as follows. "That as a careless and corrupt Administration of Justice draws the wrath of God upon Magistrates, so the wildness and looseness of the people provoke the indignation of God against a country, therefore that all such offences against God, as swearing, cursing, lying, prophane talking, drunkenness, drinking of healths, obscene words, &c. all prices, stage plays, cards, dice, May games, masques, revels, bull baitings, cock fightings, bear baitings, and the like, which excite the people to rudeness, cruelty, looseness and irregilion, shall be respectively discouraged and severely punished, according to the appointment of the Governor and Freemen in Council, and General Assembly."

The New-Jersey Journal of February 29, 1798, in Elizabethtown, New Jersey, reporting on Legislative Acts and Legal Procededings noted that "The house then went into committee on the bill for the prevention of vice and immorality...a fine of 16 dollars on bull and bear baiting in the state."

Bear-baiting was popular in England from the 16th through the 18th century.  For a long time, the main bear-garden in London was the Paris Garden, that section of the Bankside lying to the west of The Clink, at Southwark.  Arenas for this purpose were called bear-gardens, consisting of a circular high fenced area, the "pit," &raised seating for spectators.  The phrase "bear-pit" is sometime used to describe any unusually aggressive political arena in which direct, heated attacks are common. 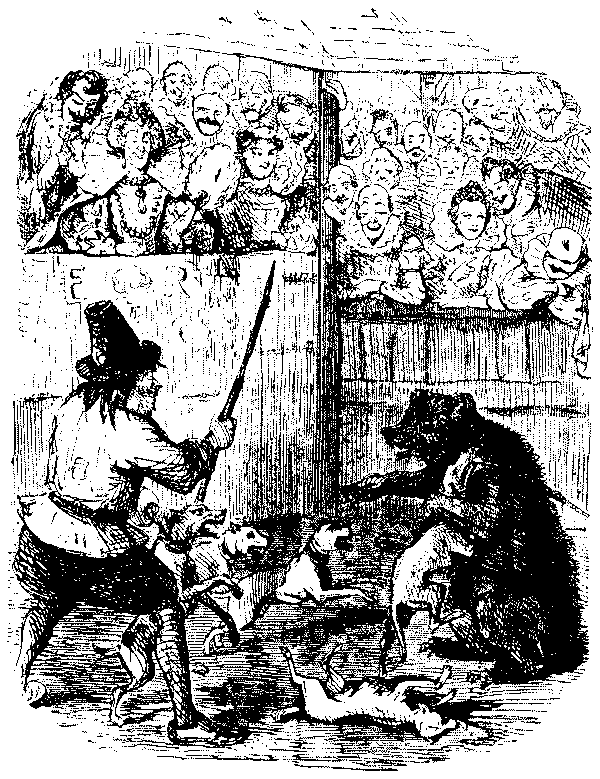 A post would be set in the ground towards the edge of the pit and the bear chained to it, either by the leg or neck. A number of well-trained hunting dogs, usually Old English Bulldog, would then be set on it, being replaced as they got tired or were wounded or killed.


England - The Country Squire holding a pup at Charley's Theater in Westminster, London

Depending on the size and fighting prowess of the bear more and more dogs could be released to match the bear's fighting power. In some cases the bear was let loose, allowing it to chase after animals or people. 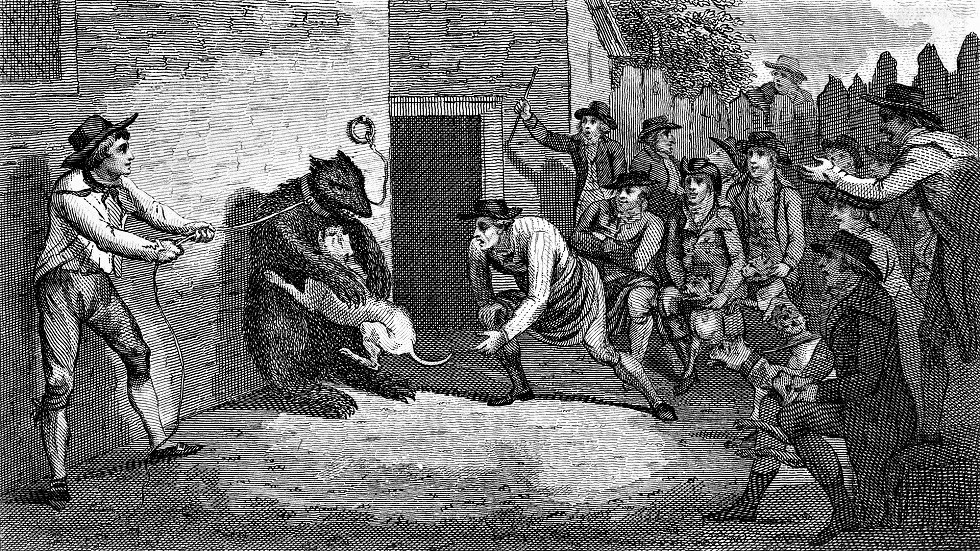 Henry VIII was a fan and had a pit constructed at Whitehall. Elizabeth I was also fond of the entertainment; it featured regularly in her tours. When an attempt was made to ban bear-baiting on Sundays, she overruled Parliament. Robert Laneham's letter describes the spectacle presented by Robert Dudley, Earl of Leicester at Kenilworth Castle in 1575:

Thursday, the fourteenth of July, and the sixth day of her Majesty’s coming, a great sort of bandogs [mastiff] were then tied in the outer court and thirteen bears in the inner . . .
Well, the bears were brought forth into the court, the dogs set to them, to argue the points even face to face. They had learned counsel also on both parts, what may they be counted partial that are retained but to one side? I know not. Very fierce, both one and the other, and eager in argument. If the dog in pleading would pluck the bear by the throat, the bear with traverse would claw him again by the scalp, confess and a list, but avoid it could not that was bound to the bar, and his counsel told him that it could be to him no policy in pleading.

Therefore, with fending & proving, with plucking and tugging, scratching and biting, by plain tooth and nail on one side and the other, such expense of blood and leather [skin] was there between them, as a months licking (I think) will not recover, and yet remain as far out as ever they were.

It was a sport very pleasant, of these beasts, to see the bear with his pink eyes leering after his enemies approach, the nimbleness and wayt [wait] of the dog to take his advantage, and the force and experience of the bear again to avoid the assaults. If he were bitten in one place, how he would pinch in another to get free, that if he were taken once, then what shift, with biting, with clawing, with roaring, tossing and tumbling, he would work to wind himself free from them. And when he was loose, to shake his ears twice or thrice with the blood and the slather about his physiognomy, was a matter of goodly relief."

Attempts to end bear-baiting were first made in England by the Puritans, with little effect. The deaths of a number of spectators, when a stand collapsed at the Paris Gardens on January 12, 1583 was viewed by early Puritans as a sign of God's anger, though not primarily because of the cruelty but because the bear-baiting was taking place on a Sunday.

What follye is thys, to kepe wyth daunger,
A greate mastyfe dogge and a foule ouglye beare;
And to thys onelye ende, to se them two fyght,
Wyth terrible tearynge, a full ouglye syght.
And yet me thynke those men be mooste foles of all,

Whose store of money is but verye smale.
And yet euerye Sondaye they will surelye spende
One penye or two, the bearwardes lyuyng to mende.
At ParyseGarden eche Sundaye, a man shall not fayle
To fynde two or three hundredes, for the bearwardes vaile."

Posted by Barbara Wells Sarudy at 4:00 AM