In Maryland, Rosalie Stier Calvert wrote to her father of attending a 4th of July party of more than 100 people, held on the banks of the Potomac under a 70 foot long tent decorated with garlands of laurel. The table was "very well provisioned" for the garden feast.  Guests were asked to come in "American made clothes," and only wines and liquors made in Virginia were served -- apple & peach brandy and whiskey. "It was a completely patriotic fete." Fourth of July picnics and barbecues often were set up in near water or under the shade of a grove of trees to protect the celebrants from from the heat of the day.

The Reverand Mr. William Bentley, pastor of the East Church in Salem, Massachusettes, noted in his diary on July 4, 1792, "The day of our INDEPENDeNCE, to be celebrated in every part of the United States. Boston has given notice of its intentions, & the patriotic Sons of Gloucester have published the same purpose. For ourselves a few are to enjoy a Turtle feast at the Fort."

In the new Washington City in 1795, over 100 persons gathered to celebrate the Declaration of Independence near the tree-lined banks of the meandering Rock Creek with a dinner prepared by the owner of the Washington Tavern. (Columbian Chronicle, 7 July 1795)

In Frederick, Maryland, in 1805, the town's residents assembled for a 4th of July dinner at Mr. John Dare's spring, near the shady banks of the beautiful Monocacy River. (The Hornet, 9 July 1805)

And at St. Johns College in the old Maryland capitol of Annapolis in 1812, "a handsome dinner prepared by Mr. Isaac Parker, on the College Green, under the shade of that majestic Poplar" to celebrate the nation's independence. (Maryland Gazette, 9 July 1812)

Near Philadelphia on July 4, 1814, an organization called Tamanny Society's Wigwam met at Richmond, on the shady banks of the Delaware River and "sat down to two tables, of 160 feet each in length, well and plentifully supplied with the best products of the season." (Philadelphia Aurora General Advertiser, 6 July 1814) 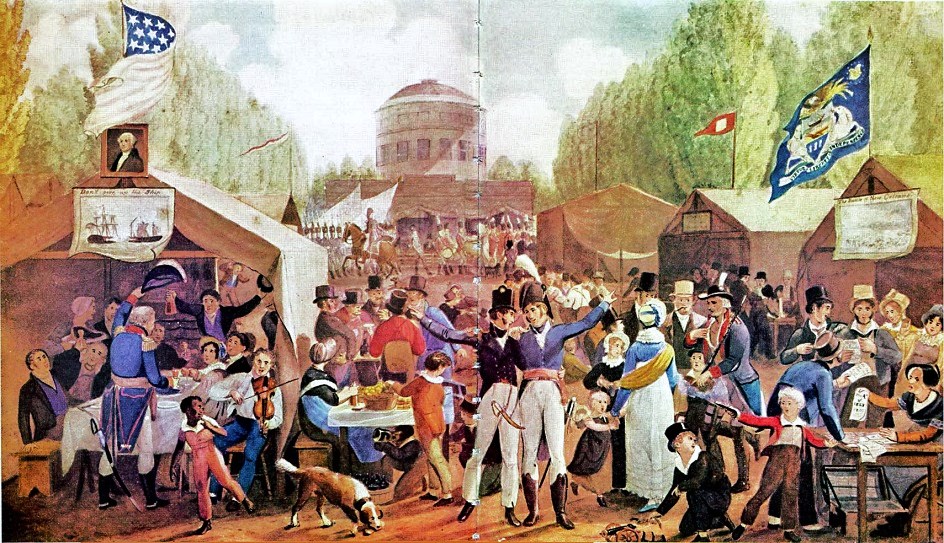 One of the drawbacks of having 4th of July public dinners and other meals, especially those where the food was left outdoors in the hot weather for a considerable period of time, was the likelihood that people would get sick. The spread of disease, especially cholera, through the sharing of eating utensils and condiments was also of concern. In 1820, in Washington DC, the editor of the National Intelligencer described in an editorial the danger of public celebrations and suggested that eating in taverns might not be the best thing to do: There are many objections, indeed, to the usual manner of commemorating the day; and it is hardly a subject of regret that ceremonies have been dispensed with which serve little other purpose than to fatigue those who engage in them, and are, to many the foundations of disease. We yet hope to see some mode devised of honoring the day, which shall not necessarily connect itself with exposure to a boiling sun, nor yet with tavern dinners. (National Intelligencer, 4 July 1820, 3.)

To celebrate the 4th of July in 1821, in Amherst, New Hampshire, the entire town decided to not have the traditional town ceremony but to gather together to go fishing in a nearby pond and then to cook up two large pots of fish chowder for all to enjoy. (Hillsboro Telegraph, 6 July 1821)

At some outdoor public celebrations, commercial vendors set up booths & tables to provide refreshments for citizens, as they attended Fourth of July events. During the 1820 4th of July celebration in Washington D.C., turtle soup was offered at Lepreux & Kervand's "near the 7 buildings," from 11 a.m. until 3 p.m., and at Burckhart & Koenig at the Columbia Garden beginning at 12 noon. Both vendors offered carry-out service. (National Intelligencer, 3-4 July 1820)

Another large outdoor dinner took place on the Washington Parade grounds in in 1826 celebrating the 50th anniversary of the signing of the Declaration of Independence. Tables were arranged in lines 500 feet in length under a temporary covered arbor and "were tastefully decorated with flowers and evergreens." For this huge celebration, the butchers of Greenwich Market cooked & served "roasted oxen" The Governor of New York was served first. He took the first cut of an ox. A crowd of citizens & military then pressed forward, formed a line the whole length of the arbour, and commenced a spirited attack upon the eatables & drinkables, in the most gallant style of epicurean emulation. The attack continued with unabated ardour until the victory was complete, and the whole assailing force, satisfied with their share of booty when they retired in a peaceable and creditable manner at an early hour. (Richmond Enquirer, 14 July 1826)

The same newspaper reported that in nearby Petersburg, Virginia, 200 citizens gathered at Poplar Spring for dinner to celebrate the 50th anniversary of the Fourth of July. (Richmond Enquirer, 11 July 1826)

Four years later, turtle soup had been added to the take-out menu on the Fouth of July in New York City. "Flushing Bay Clam and Turtle soup . . . [was] served up in the usual style, at the Flushing Hotel," while "green turtle soup" was available at the Washington Hall dinner in July of 1828. (New-York Enquirer, 4 July 1828, 2-3).

Tickets were required for most 4th of July celebrations, but at the 1826 dinner 50th anniversary commemoration in Charlotte, North Carolina, soldiers who fought in the Revolutionary War "were invited to partake 'without money, and without price." (Charleston Courier, 21 July 1826)

Outdoor public dinners often allowed for the presence of women, but females were typically not invited to organization celebrations. At such fetes, the food was usually prepared & served by men only. In 1802, a Mr. Kindig served a 4th of July dinner to men at Good Spring near Lancaster, Pennsylvania. (10 July 1802)

On Maryland's Eastern Shore, on July 4, 1816, "a meeting of gentlemen" was held on the property of Mr. Rue's tavern, where the gentlemen reportedly enjoyed a "sumptious dinner." Republican Star, 9 July 1816)

Although they would not be allowed to vote in the United States until 1920, the often excluded woman were not above taking matters in to their own hands on occasion. At Mossy Spring, Kentucky, in 1819, a group of determined pioneer women "seated themselves on the grass" and celebrated the holiday with food which each had brought from home. Copying the typical progression of the gentelmen's dinners, a patriotic oration was presented by one of the female diners followed by an offering of 13 "resolutions," not toasts, which the ladies feared might "be deemed unfeminine." (Commentator, Frankfort, Kentucky, 30 July 1819)

The seriousness with which the people at that time viewed the separation of the sexes as regards their roles played out in a July Fourth celebration is best exemplified by this unusual occurrence that took place in Peterborough, N.H., in 1829. Apparently the men in that town shirked their responsibility in arranging for their usual Fourth of July dinner, so the women took matters into their own hands, causing considerable surprise, A rare instance of female patriotism took place in Peterborough, N.H. on the 4th inst. As we are informed. The ladies of that flourishing and intelligent borough, gave the gentlemen a dinner. This is somewhat a novel instance; but strikes us as being a mode which is peculiarly well calculated to show the gentlemen how far they have swerved from their duty; and learn them by an example of the kindest hospitality that they are either deficient of courtesy, or of a laudable share of patriotism--or, possibly it might have been done from the purest sympathy for them to cheer and comfort their hearts while they are brooding over the misery which the "searching operation" of the "virtuous President" has brought or is speedily bringing about in the land ("Female Patriotism," Boston Daily Journal, 5 July 1855, 2).

To celebrate the signing of the Declaration of Independence at Northampton, Massachusettes, in 1824, the town's genteel ladies held a "Tea Party on the Green, presenting a brilliant and enchanting scene." (Boston Evening Gazette, 10 July 1824)

Another similar unusual instance occurred in Baltimore, Maryland, in 1842, when the ladies of Franklin gave a "dinner party" for the "Cadet Boys" resulting in what "was a very magnificent affair." As reported by a participant, "Those unsophisticated country lasses presented, I do assure you, a most lovely appearance. The dinner they gave us was superb" (New York Herald, 6 July 1842, 2).

Occasionally the women made a brief appearance before the meal began and then quickly "retired" as was the case at a dinner held at Piping Tree in King William County, Va., in 1830 (Richmond Whig, 13 July 1830, 2).

Some of the large outdoor gentlemen's celebrations could last for hours, include numerous rounds of toasts, and become a little boisterous. The editors of the Rhode Island Providence Patriot & Columbian Pheonix suggested on July 4, 1828, that public dinners "often" result in "excess, noise, riot and intemperance" and that dinners are not "calculated for social enjoyment." To solve the problem, the newspaper recommended that Independence Day dinners be "eaten at home with a few friends, without a drop of ardent spirits of any kind, but conclude with a temperate use of unadulterated wine."

In Washington, D.C. in 1831, at a dinner for the Association of Mechanics and Other Working Men, 300 to 400 persons were seated at 3 tables, each 160 feet in length, "with seats on each side, extending throughout the whole line, and were covered with plank, except towards the summit, which was covered with canvass" (Daily National Journal, 6 July 1831, 3).

One of the largest dinners to take place prior to the Civil War occurred in 1855 in Dorchester, Mass., where 2,000 persons assembled in a large tent "erected on Meeting House Hill" to dine (Boston Daily Journal, 5 July 1855, 1).

In Smithfield, Va., in 1855, it took an entire day prior to the Fourth to prepare for their town's dinner, which called for a wide assortment of meats and baked goods: Tuesday was a great "preparation day" in Smithfield, Virginia, for the Democratic jubilee and banner presentation was to take place on Wednesday. Chickens and ducks were decapitated by the hundred; fat pigs, lambs and calves, were slaughtered by the dozene, and a number of busy cooks were engaged in preparing immense bacon hams, and large joints and sides of fresh meat, as well as untold quantities of pies, puddings and cakes for the long tables that were spread for the numerous guests expected from Norfolk, Portsmouth, and elsewhere on the glorious Fourth (Daily Southern Argus, 7 July 1855, 2).
Posted by Barbara Wells Sarudy at 4:00 AM